In my other life, you know, the one that doesn’t involve having watery eyes staring at the pc screen all day, I’m a professional Tarotist.

Well, I SAY professional, I’m using the term very loosely, because I’ve not taken on much paid work because I’m up to my gypsy hoop earrings with interesting displacement activities - blogging, building websites, obsessing over litter and generally being a bit menopausal.

These days, lots of Tarotists use Tarot as a tool for self-exploration and empowerment rather than good ol' fortune-telling, and, given my meltdown the other day, I thought I’d give myself a 4-card reading to see if there was any light could be shed on wtf is going on with me.

I’m sharing the reading so that you can see, hopefully, the sort of role that Tarot can play in the 21st century and that it's not something that you need to fear or feel uncomfortable about. These days, it is about self-examination and/or empowerment for your sitter, and much less about meeting someone tall, dark and handsome in the Frozen Vegetable aisle of Asda a week on Tuesday.

And please don't feel uncomfortable, this blog isn't about to become my Tarot blog, normal service will be resumed on Monday or thereabouts ;-)

Anyway, for this reading,  I needed to find two cards.  The first to reflect how I feel things are at the moment (Present) and the second reflecting how I would like things to be (Future).

These cards were chosen deliberately flicking through my Rider Waite Smith deck and selecting two, based purely on my gut reactions to the PICTURES on the cards.

Here’s what I chose to represent how I see things as they are now, 10 Swords: 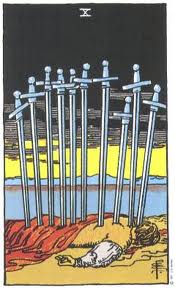 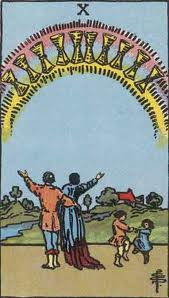 I placed the Swords card on the left and the Cups card on the right - leaving space for a couple of cards to make a bridge from one to the other.

I then shuffled the remaining cards by repeatedly cutting and stacking the deck in different ways whilst thinking about how I could move from the Swords card to the Cups card.

Then I shuffled the cards whilst thinking of what could be USEFUL to help me move from the gloomy Present card to the cheery Future card.

The final card was selected the same way, but this time I thought about which energies would NOT BE USEFUL to me in moving towards the Future card.

Here’s the card that came up for that position too: The Tower *gulp*

And here’s a BASIC interpretation of the reading that I did for myself:

Present (10S) -  I see things as being pretty dark (look at that sky!), but I also recognise my own predisposition to being a drama queen (10 Swords to kill someone? Come on, that’s a BIT much!) and possibly that I'm even being a bit spineless (see how the swords go along the spine?).  Also possibly not listening either (sword in ear!).

Future (10C) - a typical happy family with kids playing, mum and dad saluting the rainbow (which comes after the storms of life have been weathered - could be the storms of the Sword card?) All characters stand joyfully together, there's even neat little house – ah, what’s not to like?!

So how do I move from Hestia the Drama Queen to a more relaxed and happy Hestia?

The first randomly selected card is referred to as the Lord of Victory, 6 Wands,  and we can see from his victory wreath that he is celebrated and celebrating winning at something.  So, what I take from this card is that it will be useful for me also to celebrate my victories – however small.  Perhaps I will also benefit from sharing that celebration in some manner (other people in the card).  Perhaps even helping other people celebrate their victories - help other people to become successful too?

The card that tells me what is Not Useful is The Tower.  It’s a pretty intimidating card, even if you know nothing about it. *adopts deep sonorous tones* We see the power of God striking down at the proud tower, knocking the crown off and tossing the king and queen out to their doom on the rocks below as the storm rages around them.  How LOVELY!

Actually, I quite enjoy seeing this no-nonsense card and I particularly enjoy seeing this guy as someone whose energies are NOT needed for the journey (woopeee!).  The Tower recognises that we all have different sides to us – the different roles that we play in life – we are first someone’s daughter or son.  Then we may become a sister or brother, then a friend, then a spouse, then a parent, then a boss or a colleague, then….well, you get the idea.  We start to build up a tower around ourselves year by year, belief by belief, brick by brick and soon the various facets we build up become intractable: you may be a hot-shot city lawyer by day, but when you go to your parents home, you suddenly find yourself reverting to a sulky teen.  Sound familiar?

We all wear these different faces and not one of them is the genuine ‘US’.  The real ‘US’ lurks inside the walls of this Tower.  The appearance of this card, in this position indicates that it is not helpful for me to pull and tug at the various roles that I have in life.  To get to the 10 Cups, it’s not important for me to dissect my abilities as a mother, a wife or a daughter.  No amount of ferreting to uncover the root of something is going to make a damned bit of difference in taking me closer to that 10 Cups position.

Sometimes when you get down to the nitpicking, you are simply brooding and imagining stuff where nothing troublesome actually exists. That idea relates quite nicely to the idea of the first card, which is that I tend towards the dramatic (typical Leo lol!) and possibly over-focussing on slights and problems that are not actually there - or at least not worth worrying about.

Using the 4 cards of this spread, I can refocus my attentions and start taking steps towards realising the wonderfulness of the 10 Cups.

So that’s it then.  A 21st century Tarot reading.  What do you think?
Delphic utterances by Alison Cross at 22:59