You know how I love my big Usain Bolt (ie my big black runner) of a dog and everybody laughs at me because I take him out in cold weather in his jacket and snood.

Although the snood is usually shirked off quite early on in the walk.  And usually as he stoops to sniff an interesting pile of dog poop.  The snood's been in the washing.  A lot.

Anyway, you get the picture.  I love him to bits.

The other night Sonshine disappeared out with his group of fellow ne'erdowells to go to Guildford Square to 'stand and chat'.  Or whatever it is that teenaged boys do in the dark on a Monday night.  I don't ask.

And so it came to pass that I found myself lugging my overnight stuff plus flowers plus wine up the stairs to Bobby and Colette's lovely home.  At last - it was the day of Del Amitri!!!

Colette greeted me with a hug and an expression that I shall refer to as STF (stressed to fuck).  'It's so lovely to see you was your journey okay we've had a disaster WE CAN'T FIND THE TICKETS' all rushed out in one panicked breath.

I dump down my stuff.  This was serious.  C explained that they had had to move all their furniture so allow carpet fitters clear access for fitting and the tickets hadn't been seen since.  That was November. Idly I wondered whether 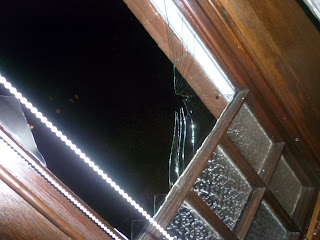 Life here at Mount Olympus has not been without incident recently.  The Christmas holibags flew past as expected - nice pressies, nice food, rubbish telly, incomprehensible Dr Who etc - but on return to school, things started to go a bit pear-shaped.

Sonshine came home and announced that Child X (let's just call him Satan.  It will amuse me, if no-one else) had been telling everyone in the class that Sonshine had shit himself in the woods. Reader, I have no idea whether this is true or false.  Even if true, it's not the sort of thing that you want people to remember you for, right?

Anyway, as the week wore on, more tales come home from school of mild unpleasantness from Satan.

Wednesday evening arrives and Satan turns up at the front door for Sonshine to 'come out and play'.  At 8.30pm on a dark, wet, January night.  Clearly they were all going to be Up To No Good.  Sonshine said he didn't fancy it.  Door closed.  End of story.

A short while later, while I was deep in the bowels of something or other of VITAL importance on the telly (ie Big Bang Theory) there was a terrible hammering on our front window. Cue nervous greyhound bladder evacuation and, if I'm honest, a partial Hestia evacuation too.

Tartarus shot out of the chair and ran outside.  Perps were gone.  Undeterred, Tartarus pulled up his hoodie and set off down the road.  Where he duly encountered a group of three boys.  Including Satan. You've seen the photos.  Tartarus didn't get that face by sitting at home at night doing knitting.  He left them in no doubt how things would go if he encountered them banging on the windows again.

The following night, Tartarus was enjoying a spot of X-Box fun in the living room when I announced that Nero needed a feed.  I dragged the dog off his bed and just stepped my foot out of the living room when there was A Situation.  For a split second, I thought, 'Fuck, the sound effects in Deus Ex are good!' only for Tartarus to fly past me in the doorway and out into the night. 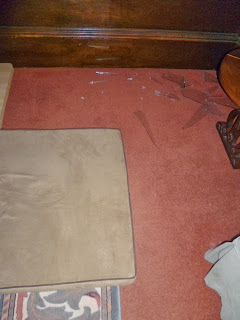 We have four cylinder glass, Listed B status windows (ie cannot remove them, must replace like with like, cannot install double-fucking-glazing etc) and one of them was in long, evil shards of thin Victorian glass, all over the floor.  And Nero's bed.  Unfortunately, I had removed the glass that had landed in his bed by the time I took the photographs.

I uploaded the photos to facebook where I spewed a furious 'public' rant at the little shit who had done this to us.

The police were called.  They duly turned up and took statements.  Including the details of the incident the previous night.

No visits to any of the previous night's perps to give them a stern talking to....NOTHING.

Sure, Tartarus couldn't positively ID Satan for the window breaking, but the two coppers sat on the sofa taking statements and saying how unlikely a coincidence it would be for another kid to break exactly the same window the next night.  How the kids could probably do with a bit of a fright, a warning shot across the bows...or at least their parents informed of the Wednesday night situation.  So I thought that was going to happen.  But no.

Sonshine goes to school and Satan gloats.  Sonshine goes to Games Night at a friend's house to discover Satan is also present.  Sonshine gets 'bare bummed'.  Which is the delightful process of being pinned down and someone planks their naked bum on your face.

So, I'm afraid that it's all down to your Friendly Non-Domestic Goddess to go and sort this out with Satan's parents and, sadly, with the parents of his 'friends' who held him down. And certainly the parents whose house this took place in.

I have also had my 3-yearly smear.  So for a bit of light relief and fun at Tartarus's man-love's expense, after all that doom and gloom, read this

Well, here we are again - we've made it through another year!  *pats everyone on the back*

I'm not making resolutions this year because, well, I always get to about the 10th of January and decide that it's all too complicated and console myself with another bit of cake and a large whisky and ginger ale.

This year I've decided to focus on FOUR feelings that I would like to experience and basically, I will be trying to do stuff that makes me feel these sorts of ways.

What are the four words?

My 2013 kicked off by finding a neat pile of fluff and ended with my memories of my own school dance horrors and trying to encourage Sonshine to be kind to Those With Unfortunate Frocks and Bad Hair.

February saw the commencement - after years of *cough* preparation - to work on the stained glass windows for the front door.  It's only taken the best part of three years, but 2013 saw the completion of BOTH windows.  There are lots of posts on the Windows Update (the only Windows' update that won't turn your computer screen blue.  Only my language) but here's the first post and the last post (should I toot a bugle when I say that?).