Hestia... and The First Principle in Making Your Marriage Work

So, we had a lovely time in Blackpool (yes, I know I've got a couple of Jubilee pix to put up) but this is WAY more important.

It may come as a surprise to you, reader, to know that not everything is CONSTANTLY rosy here in the Home of The Gods.  Tartarus can be....tricky..... and I can revert to teenager mode at the drop of a hat.  Or hormone.  And you've seen what Sonshine is capable of.

Anyway, I thought I'd see what I could do to improve things between us and bought a couple of books on Making Your Relationship Work.  The first one is The Seven Principles For Making Marriage Work.

According to my bookshelves, I'm VERY keen on anything that touts 'Seven...anything' - Habits of Successful People,  Successful Ways to Rear a Boy, Brides for Seven Brothers....oh yes, I've got 'em all.

Each time we visit Blackpool's Pleasure Beach, we push our comfort envelope a little more.  Last year, the Avalanche bobsleigh run was me, basically, flat out.

The cars run on rollers, so there is, other than the forces of nature, NOTHING stopping you from plummeting to the tarmac far, far below.

So this was me last year: 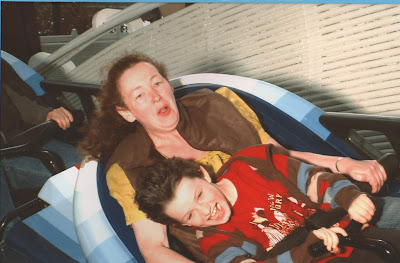 Granted, it's not my best look.  But we loved the way Sonshine was leaning into the action and the look of terror on my face.  Tartarus thought it was hilarious and the photo was duly purchased. 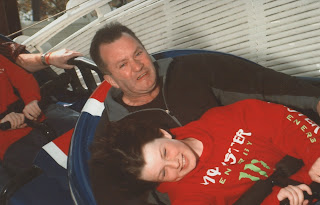 Note: Sonshine loves it just as much this year as last year.  Tartarus less so.  Me?  Thought it was hilarious and photo was duly purchased. *evil cackle*

Here's me and Sonshine on the Big Dipper.  Twice. 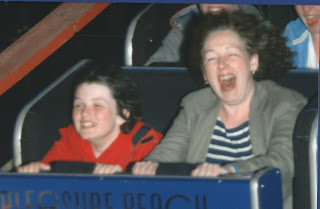 Look - you can actually SEE that I've had my tonsils removed in this one.  That was my first ever time on the Big Dipper, a wooden roller-coaster.  And it was fab.  So fab we got off and queued again for a second time.  And then in the evening, at the Jubilee Do, I went on a third time. 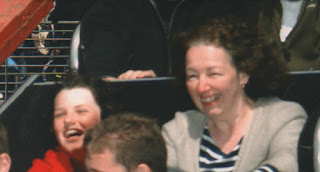 I am more relaxed on it this third time around.  I have had an alcoholic beverege.  Or two.

But not ones 200 feet up in the air.  Which is what Tartarus and Sonshine went on after this.  No photos.  Even Tartarus knew that to take a photo when you were high enough up to see the Isle of Man could only lead to imminent teeth-knocking out and possibly vomit-splatter.

Jubilee pix next time around :-)

We went to Blackpool for the Queen's Diamond Jubilee.  The place is rammed with Union flags anyway, so I figured that there would be SOMETHING there worth taking Sonshine to see.

But before we get to that, I must inform you, dear reader, that the vandalism thing was cleared up on Saturday morning.  He was up and clothed from 8am, standing at the window, waiting for the Meerkat's dad to materialise with thinners and solvents.  By lunchtime it was all good as new.  Much to Sonshine's relief.

Anyway, back to today's tale.

We booked into The Big Blue Hotel which is, um, a big blue hotel right in front of the Pleasure Beach.

This was the view from the window: 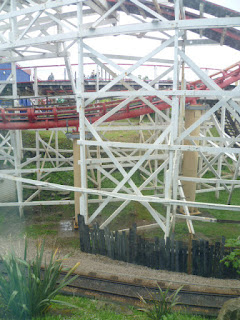 Don't feel sorry for me.  This is excactly the view that I requested - the rollercoasters.  The Red line running through the image is part of The Big One, the highest rollercoaster in the UK. the wooden track just dipping into shot top right is part of The Big Dipper - my alltime favourite ride there.  And the track round the bottom belongs to the little train.

I love the noise of the cars rattling over the rollers...I love the excited screams.   I have NO idea why I live on a very quiet little Scottish island if this is my idea of a great day out.

Lots of people hate Blackpool.  They hate the jingo-tastic t-shirt wearing baldies who run dogs of dubious character.....the barely dressed fake tans who teeter along the prom in strippers shoes and tiny dresses, even with the wind howling in from the Irish Sea.

Well, that's a bit like blaming Bet Lynch for not being Maria Callas.  It is what it is.  And it does it VERY well.   As someone who lives in a small seaside town that struggles to keep businesses going, I look at their achievements with envy.

And it IS beautiful. Look: 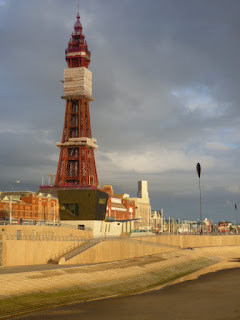 OK - in the harshness of daylight the businesses on the prom look a bit like an elderly courtesan, but the promenade itself has been overhauled and provides a glorious place to walk/cycle etc. 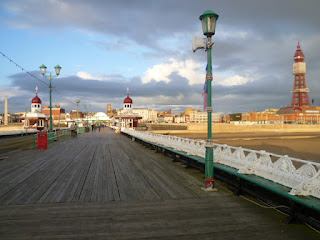 Look at the beach! 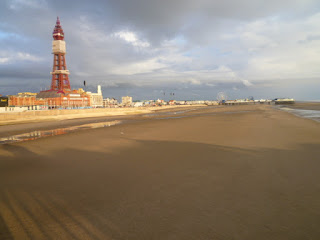 We've found some excellent resaurants - the cafe in the middle of Stanley Park serves fabulous cakes. 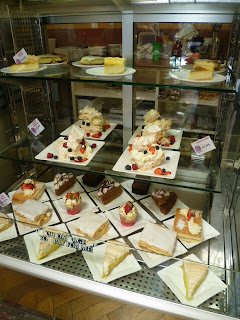 And look at their strawberry milkshakes! 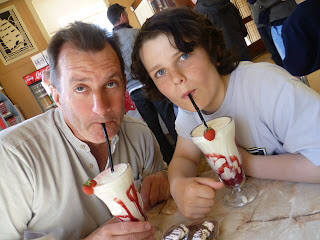 We had lots of gos on the roller coasters - I'll post up the candid photos tomorrow, along with our Jubilee party night pix.

What did you do for the Jubilee yourself?
Delphic utterances by Alison Cross at 19:05 7 comments:

Hestia and Sonshine, the vandal 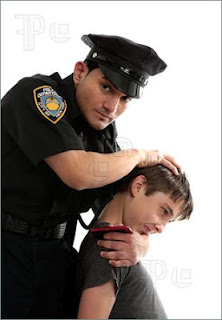 I was all set to work on my blog post about last week's Talent Show up at the school (yes, Clean Amy was SINGING, and rather nicely too), but events have overtaken the family from Olympus, dear reader.

Sonshine is not just a ray of sonshine in my life. It transpires that he is also a vandal.

The Meerkat's mother came round for coffee this morning, resplendent in WHITE.  How she keeps everything looking so clean and fresh is totally beyond me, she always looks so together and clean.  I feel like Pigpen next to her!

Anyway, we were scoffing our way through the most DIVINE Jubilee Cupcakes that she'd brought round (should have taken a photo, I know, but the cakes were not so much eaten as inhaled....) when it was clear that she was struggling to tell me something.

Well, you can't start a sentence with 'I don't know whether I should tell you this but.....oh no, I promised not to say anything,' and think for a MOMENT that I'm not going to pin you to the carpet and threaten to dribble saliva in your face until you actually spill the beans!

Fortunately, she caved before I had to fling her to the carpet.

It would seem that after Warhammer last night, when her husband went to pick up the boys, a neighbour to the club told her husband that OUR little darlings had been 'painting outside.'

Well, they often paint outside so that the glue and paint fumes don't turn them into Bez from the Happy Mondays. But further clarification was provided.

This time, they had taken their Warhammer paint and actually sprayed a wall.

With a giant penis.

Tartarus, who was present  (and also eating a cupcake) at the time of the revelation, sprang upright, coiled like a spring, his rising fury a thing to behold.

'It's alright,' the Meerkat's mother assured us, 'The Meerkat's father is on the case.  He'll be round on Saturday morning with lots of thinners to pick up Sonshine and to get them to scrub it off the wall.'

Reader, the SHAME of it!

I've never so much as scribbled a name on a toilet wall, never mind taken a can of paint and sprayed a huge penis upon a wall, in public.  Or in private.

Actually, now that I think about it, I do recall writing some deeply uncharitable things about an ex-boyfriend's current girlfriend in the lavvy cubicle of the student union. But she deserved it.  And I found my own name on there too, so we were each giving as good as we got.  And to be fair to us both, there was a LOT of other graffiti scribbled in there.  A fascinating way to spend an hour - reading the walls of the union bar ladies loos.

But that is neither here nor there.

My 11 year old son not only grafitti-ed a wall, but he chose to do it with a massive DICK.  We are incandescent.  I am behind Tartarus 100%.

In fact, I am SO keen for Sonshine to understand the ramifications of his actions that I have arranged for the biggest, scariest policeman on the island (currently off his work with a bad ankle) to come round to the house, in uniform, to talk about what has happened.  He has been primed to be in total Strathclyde Police serious mode.  THAT should ensure that it doesn't happen again.  There will be tears.  Probably mine.

On a brighter note, Nibbles is still alive.  But one of the goldfish (Adolf, we think) has died.  He has been buried with due pomp and ceremony in a tuna can.  Which was strangely appropriate, don't you think?

Hope you all have a marvellous weekend and please, if you have any stories of your children's criminal past, please share - it will make me feel better.
Delphic utterances by Alison Cross at 13:10 14 comments: