Relax, this isn't going to be a replica of When Hestia Met Paolo.  There was no pressing of the flesh, but I was still well within hormone affecting distance.

So, Nero and Sonshine were duly dropped off at My Day Carer and her husband (The Grass Fairy). Tartarus and I turned joyful Solstice faces towards Glasgow and set off on the ferry.  In fact, everything went entirely according to plan - the accommodation I had booked was expecting us! We got a car parking space right outside!  The studio apartment was luffly!  We had tons of time  to get to the gig!

We decided to walk.

Not an error in itself, but it took us a goodly half an hour, strolling down Great Western Road, sweaty joggers puffing past us, taxi drivers tooting, people unsure whether to drive in the bus lane or not....all the usual stuff.

If you read my Tarot blog, look away now because YOU HAVE HEARD THIS STORY ALREADY.  But like I said, I will NEVER stop telling people about The Day I Met Paolo :-D

So, I'm out having a totally marvellous grown-up moment with two girlfriends, celebrating my friend's 60th birthday and having a jolly nice time at a discreet and 'spensive restaurant.  We are just perusing the extensive menu when I happen to glance over the balcony (that's how posh it was, it has a BALCONY) into another part of the restaurant below.
Oh. My. God.
REALLY - OH. MY. GOD!!!!!
Paolo Nutini was standing chatting to some friends, well within hormone-affecting distance.  PAOLO NUTINI!!!!! Don't know who he is?

And now, three albums later, the boy is well into his stride:

To cut a very long story short (and that's a LONG story that I will NEVER get fed up of repeating to my long-suffering friends, I can ASSURE you!) he looked up at us on our balcony and I just blurted out "can I take your photo, please?'

"Wouldn't you prefer to come down here and have your photo taken with me?' his face crinkled into a smile up as he looked up at me.  Cue melting heart and middle-aged lady googley-eyed adoration. Also, strange stirrings in very sleepy bits.

WOULD I?!  Is the Pope a Catholic?!  Does a bear shit in the woods?! With my knees knocking and my heart pounding I ran down the stairs two at a time.  Dignity.  Always dignity.

And lo! Out he unlocked the private dining room door and emerged into the restaurant hallway, slender, floppy haired and cute as anything! He kissed me on the cheek, shook my hand, snaked his arm around my waist (I sucked my tummy in for dear life!) and my friend snapped us on her camera phone.

As per all situations that make me nervous, I began to get the ol' verbal diarrhoea: 'I bet you hear lots of people saying this," I wittered, 'but I AM a big fan and I was really disappointed not to get tickets for your Glasgow gig before they sold out.'

Then he said these immortal words: "Want me to put you down on the guest list for the Edinburgh gig?"

Reader, I might actually have let out an involuntary little 'squee' at that point!  And so it was that he took my name and scribbled it on a sheet of A4 from the goggle-eyed receptionists and stuffed it into his suit pocket.

Update:  I didn't go to the gig (I was going to see Wicked in Glasgow the following night and it was going to be a logistical nightmare, plus I didn't think that the bit of paper would make it out of his suit pocket since he was jetting in to the First Communion and from Germany and jetting straight back out again).  On one hand, I feel sad about missing out on the gig, but yanno what? It doesn't really matter for "I too had my hour, one far fierce hour and sweet, there was a Nutini by my side and shaking knees above my feet." 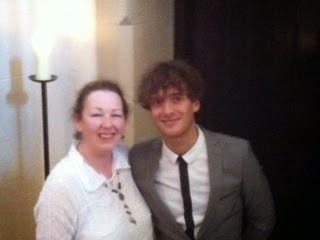 *apologies to G K Chesterton's The Donkey for bastardising its lines :-D

Sorry for the long absence!

Nothing dreadful has happened, other than the fact that I've not had terribly much of interest to share!

The imac has been resurrected more times than Lazarus and the Geeks at the Genius bar managed to get my photographs of the holiday in Argyll off and safe.  Everything else got fried in the reloading of the software - which turns out to have been quite a lot really :-)

So here's a quick resume of what you've missed:

And that's about it.  See? Nothing to report.

But I just want to thank you lovely, lovely people for your regular e-mails and little notes on my blog, asking where I was and if I was somehow locked into Downward Dog.  All I can say is, you should see my Reclining Pigeon.  You'd be itching for an air rifle to put me out of my misery.

So that's me back.  Normal service will be resumed just as soon as I can sneak on to the computer unnoticed by Tartarus.  So just pray for rain, ok?