I went to the local book shop today and have come home with this: 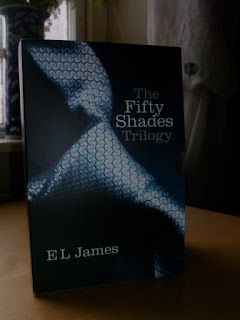 Dear Reader, have I succumbed?  Has the lure of masochistic sex been just too much for a poor Household Goddess to resist?  Have I run out of books on Theology and Philosophy? Are things getting hot and steamy here on Olympus - and I'm not talking about a condensation problem or leaving the iron plugged in, yanno?

The box is full of this: 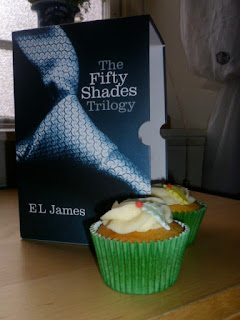 I'f I'm not back on here before Christmas, I wish you one and all a wonderful day - whatever you are doing!

I don't know where my time goes.  *whispers* Facebook probably.  But we are looking straight down both barrels of December - and it's loaded  - with all the attendant stress that comes from this jolly month.

So, I thought I'd swing by and share some November magic with you, before we are properly terrorised out of our wits with the realisation that it's only '2 DAYS UNTIL CHRISTMAS'!!!!

I bought one of these: 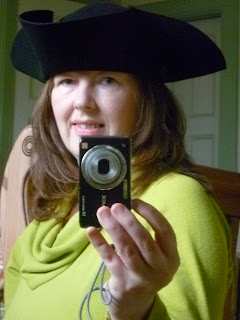 No, not a green sweater, but a black tricorn!  My friend Ania has a purple one and I thought it looked quite fetching.  I was a big Adam Ant fan back in the day and without a word of a lie, I have been wearing it around the house, coupled with a white flouncy shirt, black jeans a black fringed wrap and all the attitude of Margaret Lockwood in The Wicked Lady.

Sonshine has announced that if I so much as step into daylight in that rig-out he will phone Social Services himself.

The self-same Ania knitted me these.... 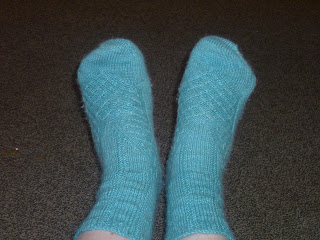 .....because Tartarus accidentally washed my beloved bed socks with the bed linen so they shrank to miniscule felted blobs that a doll would have been hard-pressed to squeeze her feet into them.

Tartarus has now departed for sunnier climes, I am wearing them in bed at night.  But they look a bit good for bed socks, don't you think?  Ignore my hairy wee pins.  I'm back to being a goaty little satyr again from the waist down.  It's winter.  It's Scotland.  My legs won't be on view until next summer.  Which is likely to be the 16th of July and even then only for half a day I expect.

I made potato scones with leftover potatoes.  Twice. 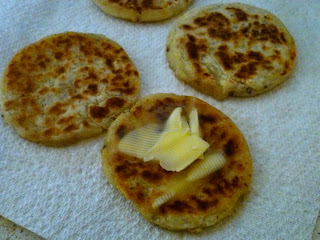 They were damned tasty.

I treated myself to this: 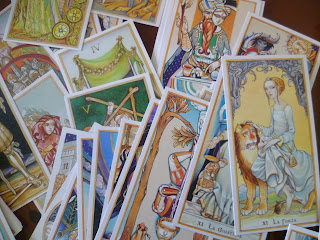 Which is a privately printed Tarot deck by a Russian artist called Alexander Daniloff.  I am loving it to absolute DEATH.

I also have this flowering in the garden.  Just the one.  And I'm about to cut it because another frost like last night and it will be reduced to purple mush* 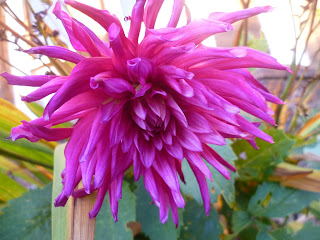 I love these cactus-headed dahlias.  It should have flowered ages ago, but I don't dig them up over winter, so the poor thing had to start from scratch in the darkness of the earth, instead of the brightness of a shed.  Pretty eh? 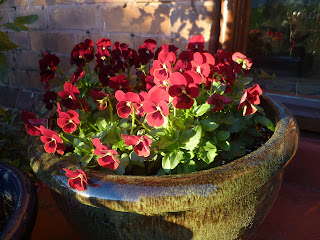 And lastly, figgy - who gave us 4 teeny weeny tiny figs.  She's not looking too well, but I'm assuming that this is ok for a Turkish Fig.  In Scotland? 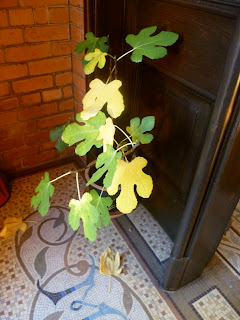 Just because I know you lot are inquisitive little souls, the blue 'M' is part of the house's name, which is mosaiced (is that a real word) into the floor.  I know. Posh.

* needless to say, I did not cut the dahlia bloom in time and it has turned to mush
*Monty Don would be ashamed of me face*

Tell me what's been happening with you!