Hestia has a Bad Weekend

So I'm all organised for my Tarot Meetup in Glasgow - I've printed out the attendee list, I've got all the handouts ready, I've got some books and some decks for people to take a look at......and the snow comes on.

....and it stays on ALLLLLL Friday.

I decide to cancel the event - not only because it's going to be difficult for me to get to/from safely, but also because I don't want people who have said that they'll come, to actually struggle out in the white-out conditions.

Hestia's Mothers' Day | The other part

So, I take Sonshine for a snow-boarding lesson (so that when he heads off to Italy with the school in a few weeks, he won't be an eczema-ridden bag of nerves).  I sent him off through the swing-doors into the snowy interiors of the Sno-Zone at Braehead and I pootered off to the cafe upstairs.

I ordered a chai latte.  I sat down and began to sip it.  And started to feel unwell.  Ever unwilling to give up on food or drink, I forced the whole latte down.  And still felt unwell.  I abandoned my table and went to my default illness position - hanging over a loo in a pub toilet.

So, Sunday was Mothers' Day here in the UK.  Mine fell into two parts - once as a daughter to Juno and as Domestic Goddess/Mother to Sonshine.

Since it is Monday, I thought I'd split the Mothers' Day report in half.  Hitting you with the loveliness that was my Mother's Day from Sonshine: 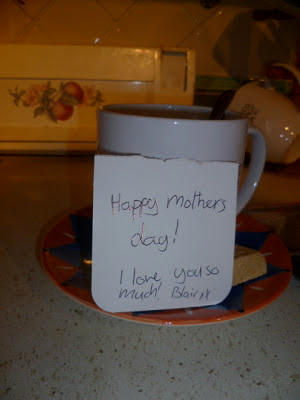 It's a rubbish photo, but it's a mug of tea with a shortbread finger and a note scribbled on a flap of biscuit-box cardboard.

It was snowing yesterday here, quite heavily.  He told me that he was going out to 'find his friends' which surprised me because of the weather, but I let him go anyway.  He was back 20 minutes later clutching a white carrier bag which contained a DVD - Argo.

It was thrust into my hand while I was on the phone to my friend as he rushed his small frozen fingers into the living room and the exquisite pain of cold fingers on a hot radiator.

So this was my Mothers' Day: 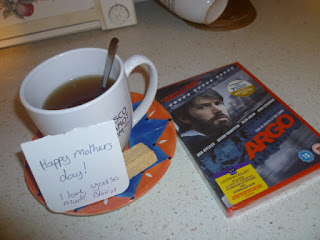 What's not to like? Lapsang Suchong and Ben Affleck :-)

So - tell me all about YOUR day!

Red Nose Day is almost upon us again and I'm slightly ahead of my usual last-minute curve and have set up an account to raise money.

This could be the ONLY chance you ever get to see One Direction on my blog.  I've put up the film so that you, my other reader who is not based in the UK, can see what the fund-raising is for.

And money is spent on children in the UK - young carers at the like.  Warning: you may have a little weep.

I'm offering Tarot readings, but of course, Tarot isn't everyone's cup of tea - you don't HAVE to have a reading, you can just make a wee donation via paypal or your credit card.

My goal is to raise £50, but two very kind friends have already got that up to £40 for me, so this year I'd really, really, love to raise £100 via the official Red Nose page.

I am part of an army, raised by author and all round good egg Emma Kennedy.  Her goal is to have her Twitter team raise £1m.

And now, to cheer everyone back up again, Smithy and his pals: