Hestia's Sonshine ....does The Passion Test

So, it's like this:  Motivating Sonshine to do anything other than play computer games is pretty hard-going.

I unearthed my Passion Test book (charity shop purchase - honestly) from the eleventy-billion Self Help  books that have not helped me one single jot.  But perhaps a teenager is a different matter.  Perhaps this will encourage him to find motivation.

Me:  I found this book *waves book around*

Me:  I think that it would be fun for you to do the Passion Test.

Sonshine:  Do I have to, like, READ it?  *already looks bored*

Sonshine shrugs and gazes at carpet in resigned-let's-get-it-over-with fashion.

Me:  Here's a pad and pencil.  I want you to spend a couple of minutes thinking of what would be in your life if it was absolutely FANTASTIC and that would have you springing out of bed with  a smile on your face EVERY day.  Ok?

Sonshine:  But I usually AM quite happy when I get up.  Unless I've been listening to you reading me a  ghost story at bed time.  Then I'm usually just knackered because, like, I have had hardly any sleep?

He's started this annoying upflick at the end of his sentences? Like this? Which I thought had died out with re-runs of Friends?  Clearly not.

He starts scribbling away.

Sonshine:  Yep.  But I don't want you to read them.

He hands me the list which I proceed to hold out in front of me like a town cryer, with the list facing him, not me.

Me:  Point number one - compare it to point number two.  Is it still at the top of your list?

Sonshine:  Nope, I'd rather have point number two.

Sonshine:  No I'd rather have point number two.

Point number two keeps it's high ranking place until we get to point number five.

Me:  I'm getting confused with where we are in the list.  Can I not just read your list and we can do it that way?

So I struggle on with each of the points, trying to keep straight in my head which points were still in his top five and which were sent to the bottom of the list.

Point number five stays at the top until we get to point nine.  Then it takes centre stage.

Me:  I'm getting confused, can I not just read the list? 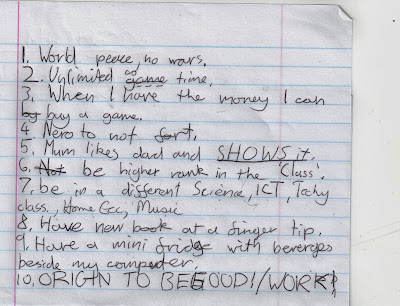 And I read what point number five is, and how it trumped the other points before it.  And my eyes whell up with tears.

Until I get to point number nine.

And realise that having a USB table top fridge trumps World Peace and his parents having a happy relationship.

Children, who'd have them?  Seriously.  Do you want mine?

Note:  Point 10:  'Origin' is where one needs to have an on-line account to play The Sims 4 or something and Sonshine's account refuses to work.  Origin only want to talk to us with a live person, not e-mailed instructions.  Or a telephone call.  Which is just NOT on the cards at all. 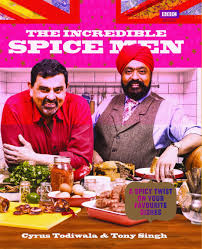 Before the Incredible Spice Men strode onto BBC2 in a clashing riot of orange, pink and tartan, I was a complete POOF when it came to spicing up my food.

I'm such a woose that an unexpected dalliance with a Victory V can set me chundering for a jug of cold water.

My domestic goddess authenticity is also a bit suspect.  Remember my attempt at making almond lemon cake? It took about half a dozen attempts to get it right and by that time Sonshine and I had eaten so many egg-rich cakes I thought we would need some kind of medical intervention before we managed to get to the toilet again unaided.

I am, however, a complete push-over when it comes to the purchasing of cookery bookeries.

Dear reader, I have been neglecting you shamefully over the past few weeks.  I would love to tell you that it's because I've been busier than 10 men with the writing, the leaded glass work, the gardening, the being 50 and making the most of the dying days of summer.

But I'd be lying.  I've simply been doing nothing.  Certainly nothing worth putting pen to paper about.  Or finger to key. Or whatever.

It's been mainly Facebook, if I'm honest *hopes that Tartarus isn't reading this on the Engine Room computer*

My daily grind at the moment is getting Sonshine off to school and getting Nero out for his 2-mile walk through the wood.  Yes, the very same wood where I fondly imagined there to be a dead body wrapped in a hideous 70s quilt cover.

I do a lot of thinking when I'm out with Nero.  Here are some of today's random thoughts:

I've brought 3 poo bags. Surely that will be enough....

What if I entered a poetry competition once a month?  I could totally do that.  I might even win something.  Remember, you won that thing in the Library last year.  Yeah, but probably no-one else entered that.  There's a big difference between winning a £15 book voucher and £1000 from the Basil Bunting Poetry Award.  Andrew Motion is the judge for that.  Did I take that poetry book back to the library?  Fuck, the fine will cost more than the book!

I hope these wellies don't start to chaff...

Is that a chantarelle mushroom?   *has sniff.  No scent of apricots.  ignores the mushroom. Walks on*

What about writing a bit more of that play? The one about the elderly comic who comes home to Scotland to visit his daughters, finds love and a new lease of life?  Who the fuck would want to watch that? It would be like paint drying.  Oh wait.  That's actually the plot for Last Tango in Halifax.  Bastards.  I should have written this when I had the idea in the first place.  *consigns idea to mental bin*

I've only brought 3 poo bags.  That won't be enough.

That's where I saw that body in the duvet.  Except it wasn't a body of course.

Right, let's practise this 1-hour presentation for the Tarot students in Greenock.  *looks around.  No-one there.  Starts giving presentation.  ALOUD.  I talk out loud to no one for at least 15 minutes...getting into my stride.... when....*

JESUS  - that's a two-bag shit, Nero.  In fact, that's a shit that needs two pairs of hands, never mind two bags!  That Leaves me ONE bag for the last mile.  It won't be enough.

What about getting a writing festival going here? There could be poetry and flash fiction competitions for the schools?  Maybe get the PTA to finance the prizes?  Or publishers - after all, it would be educational.  Or we could hire the Pavilion for the day - all of it - and have Scottish authors reading passages from their work and talking and answering questions.  Maybe Ian Rankin? Alexander McCall-Smith....he's got a house in Argyll somewhere.  Local writers could get involved too - we've got a few good ones!  Myra (Duffy) and Jenny (Chaplin) could talk about self-publishing and sell their books? Local writing group could run workshops...... We could explore the format of the essay and the short story..... we could talk about recording our elderly relatives histories....we could have well-known poets too.  Fuck, ARE there any well-known poets?!  No.  A Festival of Writing wouldn't ever get off the ground.

Note to reader  - I don't actually think in brackets.  I added them for your delectation and delight.  Also, for googling purposes.

Why does the dog insist on pissing on his own foot?

I need to get cracking on this book for the Tarot of Alexander (Daniloff).  I've only written about 6 cards.  What if he doesn't like what I've written?  What if it's so completely off the mark he says that I can't continue?  What if I can't actually write anything bout Tarot that anyone wants to read?

*remembers that she is half way through giving Tarot presentation to the trees.  Starts talking aloud again.  Hears polite cough behind her.  Stops talking.  Allows man with jack russell dog to hurry past*

I haven't blogged for AGES.  No one will come back to read anything I post now....

Please, Nero, don't crap there.......it's someone's GARDEN *looks round apologetically and scrapes up a poop that really needs more than one bag to do it justice*

By this time I am back at my front gate.  We've walked 2 miles. The dog is knackered.  I am the only person in the world to return from a dog walk completely hoarse.   I have given my 1-hour presentation aloud.  Twice.  I have what may or may not be a chanterelle mushroom in my pocket.  Some random jack-russell-owning dog walker thinks they've met an utter basket-case with a greyhound.

*reads back over the blog posting*