My girlfriend, Calynn, is a wonderful hostess.  She organises weddings and miscellaneous parties and so I was delighted to be invited to a Royal Wedding Tea Party  'hats compulsory'.  This is after all, the Duke of Rothesay's Scottish seat (Chuck is not called The Prince of Wales when he comes north, but the Duke of Rothesay).  Calynn would not let this day go unmarked in this town of NO STREET PARTIES..... 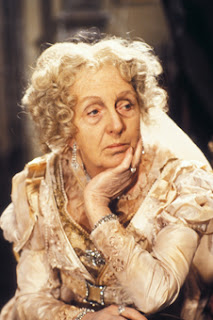 I wonder what Kate will wear tomorrow? Whatever it is, she's such a pretty girl that it will need to be truly dreadful to make her look bad.  Dear Reader, gird your loins, I am about to attempt a Fashion Blog post.  Sort of.

Trying to get Sonshine to eat anything of a vegetable-type nature is an endless quest to successfully disguise roots and froots:  He hates tomatoes (but loves tomato sauce).  He hates mushrooms for their flavour and texture.  I can understand the thing about tomatoes; I don't think I voluntarily ate a raw one until I was about 16.

Anyway, we came across the recipe for Cauliflower and Cumin fritters with lime yoghurt and, since it passed the Random Ingredients Test....Mr Ottolenghi's dish has become a firm favourite in our house.  Even with the wind thing afterwards....

Hestia gets into some Bad Company

Classic Rock magazine once started a review of Paul Rogers with the words, "Like good wine and bad women, the holy voice of Paul Rodgers gets richer with age."

And it's no lie - the man's voice is like honey rolling over hot coals.

The letter from the hospital has arrived. I am to be parted from my gall bladder forever on Thursday 12 May.  Of course, Tartarus will be deep in the bowels of his Mexican engine room at that point and so....ladies and gentlemen.....my mother and not-my-boyfriend-Ron will be looking after me and Sonshine until I'm back on my feet.

Hestia.....and the differences between us 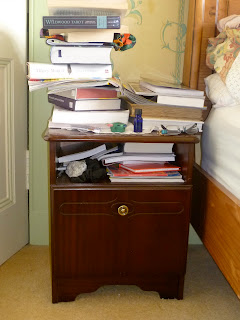 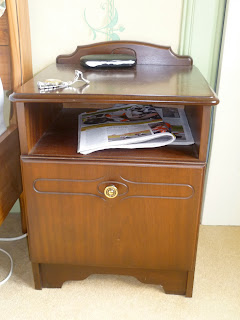 Guess which bedside cabinet belongs to Tartarus and which one belongs to me?

Now you have a greater understanding of just why he gets quite frustrated with me on the tidiness stakes. Put it this way, I daren't take a picture of my cabinet with the door open.  I would DIE of book-related shame......oh the squalor! the piles and heaps of things that were due back at the library WEEKS ago....

What about your own bedside cabinets? What could they tell me about you?

It began on Friday.  Tartarus went off to the memorial gig for our friend Jim who died rather suddenly a month or so ago.  It was a sort of blue-grass night, where they did covers of all Jim's favourite songs - whether they were by the Doors, Dr Feelgood or Donny Osmond.  Only kidding about the Donny Osmond.  Even so, it was quite an eclectic evening by all accounts.

Thank you so much to Perdita's Pursuits for giving Hestia this exceptionally cute little award which is for blogs with under 300 followers.

It makes me insanely happy to receive these little logos.

The rules of the award are that you should pass the award on to a handful of blogs with under 300 followers and provide a link back to the person who awarded it to you.

Before I start, I have to say that some of you don't have a gizmo that lets me see how many followers you have, so those blogs weren't counted.  Anyway, I now have my long frock on and my tiara pinned in place:

I award this ultra-sweet little logo to these other blogs which have under 300 followers:

1  Legend in his own lunchtime

3  How The Hell Does This Work

I would also make special mention of Tired Dad whose blog has reduced me to tears today.  He usually makes me pee myself laughing - do read him!

Finally, I would strongly recommend that you take a peek at the Blogging Gods on the right of m'blog, they're all great and worth reading ;-)

Thank you very much again to Perdita for the award :-)

Word of warning - Edinburgh zoo is on a VERY steep hill and by the time you are halfway up, and you're a 'little' unfit like me, you'll be praying for an iron lung, new calf muscles and a chance to sit down. 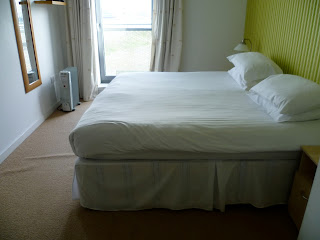 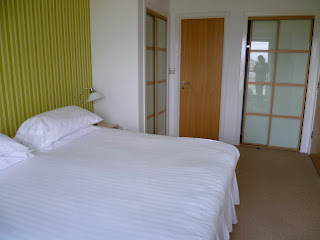 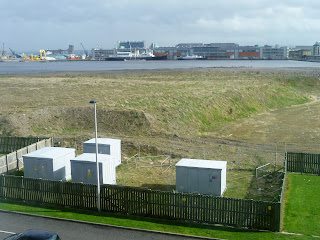 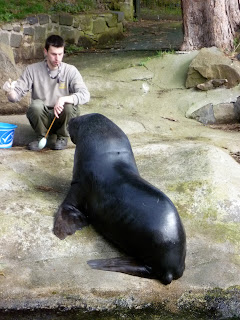 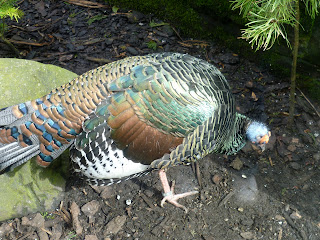 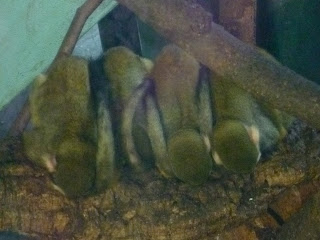 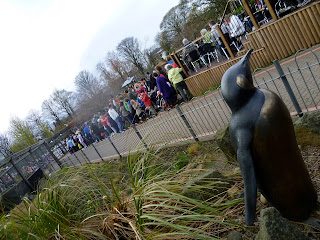 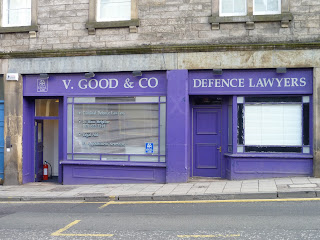 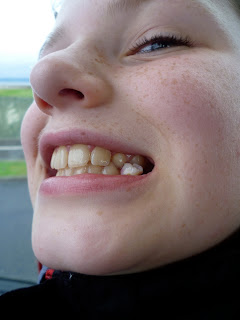 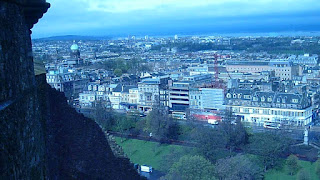 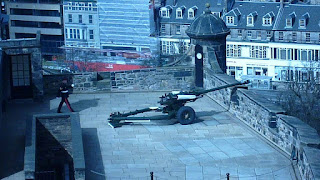 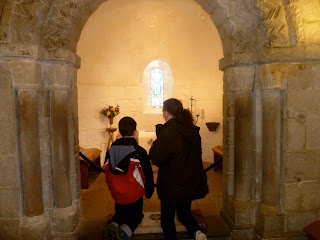 Sonshine and Hestia get on their knees in St Margaret's Chapel at the Castle and wonder whether they could nick the silver.
So now we're back home and it already seems like a dream
(albeit one with a couple of nightmarish sections)

Everything was going pretty well until we started the brief drive back from Edinburgh Zoo to Leith docks, where we are currently residing.  Tartarus had forgotten to pack the map and pretty soon we were zooming into Edinburgh city centre - which, if you've been trying to drive in Edinburgh recently is Not Where You Really Want To Be.

'I don't need directions,' snapped Tartarus, bumping the car down yet another narrow cobbled lane to no-where.

As we drove down the Ferry Road for the third time, Tartarus agreed that once the traffic lights had changed, he would pull into the garage over the road and get directions.  The lights changed and Tartarus zoomed past the garage.  I pointed at the garage, mouth gawping noiselessly.

'If we had a sat nav, this would not be happening,' he seethed.

'If you'd put in the bloody map this wouldn't be happening either,' I snapped back.

'What about over here?' I suggested, pointing to an as yet unexplored road.

'See when you're in Hollan with R in June, I hope you're as fucking unpleasant to him as you are to me when you're lost,' I  shouted back.

Sonshine sat quietly in the back of the car.

Reader, I discovered that I couldn't be bothered to drag myself out of it.

And the worse thing? Neither Tartarus nor Sonshine realised that I wasn't even talking.
Delphic utterances by Alison Cross at 19:57 12 comments:

OK - I'm never very sure whether it's Mother's Day or Mothers' Day....so I'll just go for Mothering Sunday instead and avoid any apostrophe apoplexy.

I wondered what I might receive from my permently cash-strapped son.....

This morning a beautiful little card was delivered.  Along with a huge box.  The huge box turned out to be from Amazon.  It also turned out to house the Nigel Slater 'Tender' book that I'd bought.  FOR MYSELF. with my OWN CREDIT CARD....but which Sonshine had craftily intercepted from the postie.  And passed off as his own present.

He is his father's son.

PS - have also collected the gorgeous Artisan Kitchenaid mixer in fire-engine red from Frasers in Glasgow today too. So that goes a little towards assuaging my Nigel Slater book-napping moment.

Hope you're all having a lovely day :-)
Delphic utterances by Alison Cross at 19:01 8 comments: 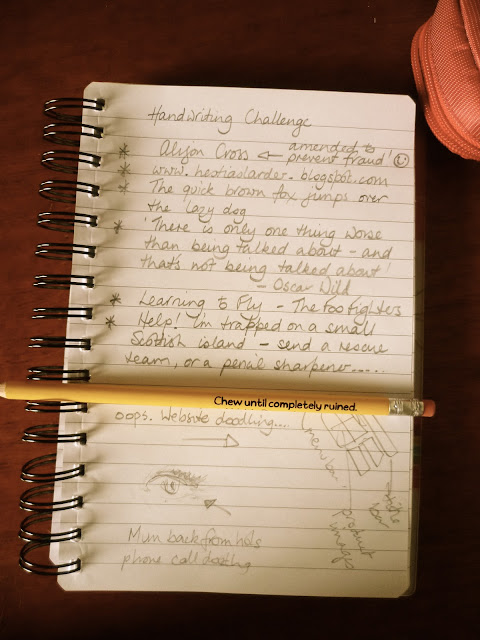 As completed by Christina and Fanny Pinkleton


Note - I doodle on everything - there is a doodle for a client's website and also an eye that I doodled whilst my mum told me about her recent holiday with not-my-boyfriend-Ron.
Delphic utterances by Alison Cross at 15:00 7 comments: