I am working on being socially distant and still functional - we're ok over here at the moment.  And I want us to keep it that way.

Unfortunately, being socially distant from my friends means being at socially close quarters with Tartarus for most of the day.  With predictable results.  I had to get outside.  Time to start looking at the garden .... I am ASHAMED.


At least I have the good grace to look and sound truly contrite.  Which is how I am every single year.  I always INTEND to start in February, but I never do.  I am a gardening slattern. 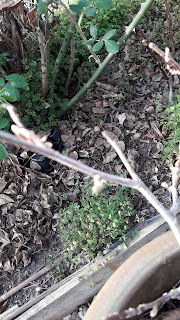 This is my magnolia called Star Wars.  It has tiny white flowers, rather that the Joan Collinsesque voluptuous purple ones that I adore.  This is the umpteenth magnolia that I have purchased.

Which is code for 'I always manage to kill them.' 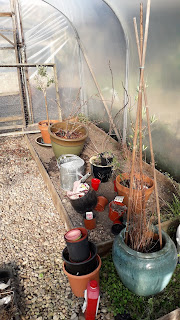 The desiccated tomato plants removed and all pots watered and moved to the newly emptied bed until safe to put outside. 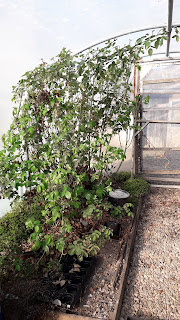 Yeah, that rose has got to be cut back to ground level.  I don't worry about buds.  Just hack it back. Life finds a way. 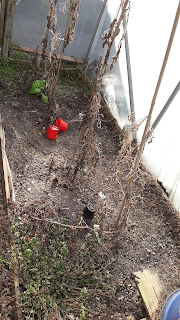 That might be a lettuce. Which is odd because I didn't plant lettuce. 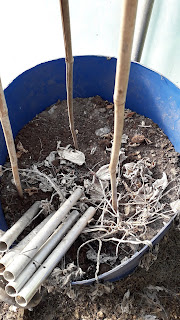 This was my cucumbers and a wind chime.  The wind chime grew better than the cucumbers.  Number of cucumbers last year? NIL.

And thus endeth Day 1 of my Gardening Adventure.

Delphic utterances by Alison Cross at 13:17 No comments:

Hestia and life in the time of coronavirus

One day, our diaries will be historical documents, so we might as well document what's happening.

The virus isn't in Argyll & Bute yet - or at least there are no publicly confirmed cases in the area that I've heard about at the moment.  But that will change.  And it might change because of the Easter holidays and the University students who have been told to go home.  And maybe not to go back to uni this term.  That's a lot of bodies on the move back to distant communities.

Sonshine is just finishing second year at St Andrews and lives in a house with two other Scottish lads (Dirty Harry and Fightin' Fraser).  Who are lovely.

Tartarus has driven up to St Andrews today to bring home Sonshine and whatever worldly possessions he wants to keep.  Because it might be the case that we go into some kind of lockdown scenario and they will not be back before the end of the lease on their property.  I think we will be kissing the refundable deposit goodbye.

I wonder what the boys are doing about the gas and electric.  *can feel financial panic rising* Maybe today isn't the best day to be worrying about that.

Anyway here on our sleepy island, things are not as bucolic as is usually the case.

We have one Big supermarket - the co-op - and any time I've been in in the past week, it's been full of folks milling around wondering who the feck is hoarding all the toilet roll, rice, pasta and butter.  And, as of today, I'm wondering who is also hoarding the butternut squash and the chickpeas.  I know - very first world problems, right?

Tartarus and I are trying to keep ourselves out and about, but, paradoxically, not being very sociable.  Well, Tartarus has been at the pub for three evenings last weekend, but I have asked, all 'nagging wife' jokes aside if he could please stop doing that as you just don't blerdy know what's going on in public spaces - especially pubs.

Juno, my mother, is on the mainland and living in her 'supported' housing.  She has stocked up on gin and jigsaws.  Has also got series 2 of The Crown to watch and a boxed set of The Sopranos.  'Hen, I survived being bombed by Hitler, so being stuck in the house for a month with a box set isn't much of a hardship.'

The plan is, I think, at the end of that month, when things are - god willing - starting to flatten down in the UK, that I can bring her down to the island for a month or so.  Not staying with us.  Oh for GAWD'S sakes, that would be madness! But my friends have a one-bed cottage that she will be able to rent.  She'll be nearer, but still able to be isolated if the need arises.

I am trying not to panic, but the truth is that the chaos that is swirling around this virus frightens me more than contracting the virus itself.  Someone on the island, for example, discovered that her mother's toilet roll had been stolen by a visitor to her mother's house - carer? cleaner? I have no idea - but WHAT THE ACTUAL FUCK?!

There is a really thin veneer of civilisation on us (well, clearly its thinner on some folk than on others) and it won't take much for that veneer to chip right off.  That scares the crap out of me.

I am spending my time flicking between scare stories (AKA 'up-to-the-minute-updates') and weeding.  Flicking through my packets of seeds and being determined that things will, as somebody famous once said, be ok in the end.

And, if things are not ok, it's not the end.

With lots of love from me and mine to you and yours, wherever you are <3
Delphic utterances by Alison Cross at 14:24 1 comment: