Every single year I have posed Sonshine on the front step and snapped him in his sparkly clean school attire.  It's the smartest he looks all year.

Yesterday was Back To School day for us up here on the West Coast.  Should have been Wednesday, but it clashed with Show Day and so some In Service Day magic was conjured up.

Yesterday we did not take the photo because some pals turned up and it is clearly Uncool to be photographed by your mother (still in her jammies) and half past eight in the morning.

As a Leo, I am BIG on tradition - so he had to get a photo when he came home.  Under protest, of course.

Not so well-groomed at home time, eh?

Loving having the house to myself.  Well, myself and Nero, of course!

When does school go back for you?

Today was the island's Agricultural Show - a Big Thing in the social calendar.

Now that I have a dog, I thought I would enter him into a couple of classes at the Dog Show.  You may recall that a couple of years ago I was Steward at the dog show; a day of such unrelenting pelting rain that it we expected Noah to start rounding up the show animals two at a time.  It was such a mad day, it took TWO blog posts to recount in all its glory.  And for the benefit of my new reader (thanks for reading this btw :-)) here are the links - Part 1 and Part 2.

This year I decided to enter Nero into The Best Six Legs and don a little black skirt, black opaque tights (so that no-one could see my legs were as hairy as a greyhounds too) and black high heels.

But as show day dawned, I realised that I no longer owned such a thing as a little black skirt. I only owned a small tartan miniskirt that I hadn't worn since New Year 1998.  It actually fastened, but if I so much as sighed, the material threatened to split like a badly cooked sausage.  I pondered throwing ona  long skirt instead, but since you couldn't see my legs at all,  it simply wouldn't do.  I slid my gaze hopefully to Sonshine.

Me:  You still got those skinny black jeans that are too tight for you?

Sonshine:  Maybe.  Why?  *looks at me suspiciously*

Me:   Would you be prepared to wear them to take part in the Dog Show today?

A long silence ensues and he regards me balefully and with much resentment.  The unspoken words in his head are, I am sure 'I'm only doing this because you were FIFTY yesterday)

Sonshine: *sadly and with feeling* Okay then.....

Of course, I care not a jot about his interior monologue and mental accusations, just so long as I don't have to wear the tartan mini skirt in public.

And so we went up the field and I entered him in the Best Six Legs AND the Sporting Dogs category.

Reader, you will never believe it, but my recycled racer and my boy came THIRD in the Sporting Dogs category!!!!

They came nowhere in the Best Six Legs (only 3 male entrants) because the judge did not take into account the skinniness and blackness of Sonshine's legs AND his black and white T-shirt matching up with the dog's legs and markings and awarded the male's rosette to a loud asshat with a boxer that had slipped its lead and run amok earlier in the day.  Who says that a noisy child doesn't get what it wants?!


But THIRD best Sporting Dog, from about 13 other dogs!!!! We are very, very proud of Sonshine and Nero.

Sonshine got an extra 30 minutes on the computer for coming third and Nero got a pig's ear.  Parenting: I'm doing it the best I can :-D 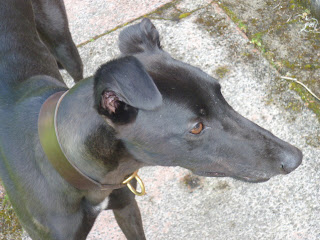