Despite, my injuries (wounded pride more than anything) I picked loads of brambles yesterday and set-to having a very Hestia-inspired day. The kitchen was littered with mixing bowls and used pots as I gamely tried to make meat-balls, lasagne and bramble jam ALL AT THE SAME TIME *waits for applause*.


The meatballs and the lasagne were a success, but the bramble jelly was a spectacular FAIL.

The recipe said to take your brambles and add twice the amount of apples (so I put in 500g brambles and a kilo of apples off my wee tree).  I was to bring it to the boil and make sure the apples were soft.

I duly got the big pan on for a boil...and then reduced to a simmer.  I set the timer for 30 minutes and pottered off to do something interesting with the mince for the meat balls and lasagne.

The timer dinged and lo! the apples were soft - but there wasn't a lot of liquid in the pan....perhaps I had it on for too long.  Anyway, the next part of the recipe said 'strain overnight'.  I went through into the Back Cupboard which is where I keep EVERYTHING that you buy for the kitchen thinking THAT'S handy' and then never use.  In there I've got a fondu set, a fruit dryer, jam pans and umpteen mystery products purchased for me by Juno (from QVC) in the vain hope that she could civilise me. And there SHOULD have been a jelly bag....but it was GONE.

No names, no pack-drill, but I bet that someone whose name starts with a T and ends with a 'stabbed to DEATH' has binned it.

I phoned round a few friends who were jelly bagless.  I even tweeted.  Suggestions for Heath Robinson style jelly bags abounded.  I decided to go with two of them - use a sieve AND a brand new washing cloth.  I duly humped the hot ruby red piles of fruit into the straining creations and retired to watch The Biggest Loser with Sonshine.

If jam success was judged on smell alone, I'd be a winner - the smell of cooked apples and brambles was divine.  I could hardly wait until the morning! 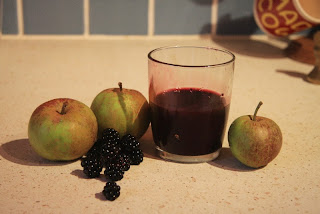 Don't strain your eyes, it's half a small glass of...stuff.  A kilo and a half of fruit resulted in THIS!!!  Mind you, it tastes delicious.  I'm thinking of calling it 'my reduced jus' and serving with an apple tart and cream.

I still have about a kilo of brambles...and am just going to make some kind of bramble jam.