Hestia scoops a prize from Fashion's Most Wanted 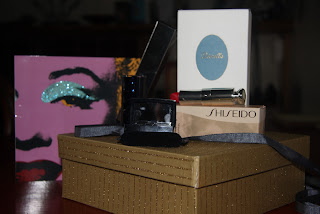 It was my birthday earlier this month and, despite an unpromising outlook, it turned out lovely in the end.

The following day, it got even BETTER when this box of fablasness turned up from Christina Lindsay from uber-cool blog Fashion's Most Wanted.
She had been sent a consignment of Dior products which she had reviewed on her blog and had decided that it was time to share the Dior love around.
All you had to do was put your hand in the air if you wanted to be considered for the draw and just cross your fingers that you got picked.

Since my luck runs to things like being the only person who needed elastoplasts in the stained glass course, I didn't hold out much hope of securing the prize  - but wonder of wonders! My name was picked.
Now here is an ASTOUNDING fact.  The names of everyone in the draw were put into a hat - no doubt designer - or possibly a mixing bowl from the kitchen and *fanfare* MRS JONES, the designer of THAT iconic white jumpsuit for Kylie, picked the winning name out!!!!
Do you realise what this means????? I was utterly beside myself with excitement: Hands that have created clothing for Kylie have TOUCHED A BIT OF PAPER WITH MY NAME ON IT!!!

Added in later:  Plus if you go to Christina's blog, you will see ME listed between Alicia Duvall and Alison Goldfrapp and Hestia listed after Hermes- again, as close as I'm going to get to fame and fortune lol!
Despite being more than a little familiar with the jumpsuit in question (and what man alive would deny it?!), Tertarus just looks blank when I mention my excitement about this to him.  My friends' husbands are equally bemused, but my friends have gone just as APE SHIT with excitement as I have.  Let's face it, it's the closest we'll EVER get to the divine Miss M - or indeed the equally divine Mrs Jones.
Along with a fab Warhol card, the gift box contained: a Dior Mascara which goes on as light as a feather, a Dior eyeshadow in a fab metallic grey, a Dior lippy in red that should really be written RED in foot high capital letters, a tube of Shiseido cleanser and a whopping great bottle of Dior Diorella.
I now have no excuse at all for being a frump.
Christina - thank you!  You made my day and I la-la-la-la-la-la-la love it.
Delphic utterances by Alison Cross at 16:24