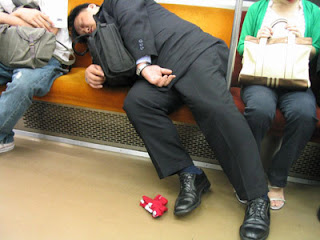 It was around 5pm when they boarded the train and, to Tarturus's annoyance, there were no seats left - every conceivable horizontal surface was taken up by a commuting suit-wearing type.  There was no quarter given for a couple of fairly scruffy looking chaps in denim jackets.  Where to sit?

They wandered through the carriages, scanning for empty seats when their combined gaze alighted on a distant bank of seats - with only one person sitting in the corner.  'Sitting' was putting it a bit loosely - he was propped up in the corner and, as Tartarus says 'we should have known better when every other carriage was mobbed and this set of seats was vacant.'  Plus, the smell of drink should have alerted them to something.....but the guy looked quite smart.  What could possibly go wrong?

It's an hour-long journey from Glasgow to Edinburgh and our two likely lads didn't fancy standing all the way, so they sat down.

As the train chugged along through the less salubrious outskirts of Glasgow, the man in the corner was jiggled awake.

Tartarus recalls that his heart sank because the man was rip-roaring drunk.

The first thing that the man said as he shakily drew himself into the upright position was: 'What the fuck are YOU looking at.....speccy?' to the bespectacled Jim.

Jim, who is your original Mr Angry, simply dismissed the guy with a wave of his hand and continued looking out the window.

But the drunken suit-wearer would not be denied his answer.  He wanted to know what Jim was looking at and addressed his 'speccy' comment to Jim again.  Tartarus said it was at this point the cold hand of fear started tugging at his innards.  This could not possibly end well.

Now, for those of you who are just new to all this talk of Jim, I shall just put a quick reminder in here.  Tartarus had a very volatile friend called Jim, who died recently.  Their friendship spanned back to the days of flared trousers, Tiger Feet and sneakily consumed bottles of Buckfast Tonic Wine.  But whereas Tartarus and Lovely Dad went on to get jobs, good careers, families and mortgages....Jim was left behind in the land of Benefits, labouring jobs and endless Court appearances.

Yes, he sounds like a nightmare, but really, underneath it all, he was a kind person who would much rather do you a good turn than do you a bad turn.

Unless you are a drunk man on a train calling him a speccy bastard.

Let's return to that train carriage now.  The comment has just been addressed to Jim for the second time and he is struggling to control his temper.

What happened next was VERY shocking.

The well-dressed businessman then SPAT at Jim.

That was the proverbial last straw and before Tartarus could place a restraining hand on his friend's arm, the friend was up out of his seat and hauling the guy up by his lapels.  A bit of a man-fight then ensued in the long passageway of the carriage (think Hugh Grant and Colin Firth in Bridget Jones' Diary) with lots of scuffling, grunting and half-assed slapping.

Tartarus says that he was very embarrassed:  Usually by the time Jim gets into a fight, everyone is drunk and it's quite a good spectacle.  Pardon the pun.  But it wasn't even 6pm yet.  And they were on a TRAIN.

The ticket inspector entered the carriage, took one look at the scene in front of him and turned on his heel, straight back out again.

The two fighting men were now approaching a clearer space in the train, near the doors (everyone had unsurprisingly melted out of their way as they punched and pushed each other down the carriage) and Jim managed to get a little space between himself and the drunk man and landed a successful blow right on his jaw.  The force of the punch sent the man reeling backwards.....against the double doors.

Which promptly opened and deposited the man (still holding his briefcase) onto the platform of the station they had just pulled into.

As the man staggered to his feet, the doors hissed closed and the train chugged off on its journey to Edinburgh, leaving him confused and disheveled on a deserted platform, somewhere near Falkirk.

At this point I always think of the poem 'Adelstrop' by Edward Thomas re-envisaged as this very train, this very journey, that very silent moment...but just after a fight.

A woman piped up from the corner 'That's a shame, he was only drunk!'

Jim picked up his specs from the floor of the carriage and shot her a threatening look.

Tartarus said the only sound in the carriage was of 200 newspapers being hastily flicked open.

The remainder of the journey passed uneventfully, but Tartarus was sure that when they reached Edinburgh, the Transport Police would be there to escort Jim off for a nice 'chat'.

As they skulked their way through the station, they heard a shout behind them and turned to see a man in his 50s running after them, waving his briefcase.  They stopped.  'Here it comes,' thought Tartarus. 'The police will be here any second now.'

The man trundled to a standstill. 'I just wanted you to know,' he panted, 'that I've been travelling on that train every night for the past 10 years and THAT was the most entertaining journey I've ever had.  Thank you so much!'

And after all that......they never bought the car!

Delphic utterances by Alison Cross at 09:21