In March there was further confession from me as I revealed that my waxing schedule had been a bit....remiss.  And yes, I did go ahead with the glitter and the bow *looks down fondly*  I've now given it a side parting and a fringe.

April saw a frisson of excitement as an old (as in long-standing, not decrepit) school friend materialised in a garden centre.  By way of update, I sent him an e-mail.  He sent me one back.  I sent him another one and then he vanished into the hinterland of my life, never, I suspect, to be seen again.  Ah well, it was a jolly nice frisson of excitement while it lasted.

And there was, of course, Tartarus's birthday sponge.  The Sponges of Doom.  They were so bad, they had a CRUST.

May was pretty quiet, blogging wise, but my lovely friend Di crafted me a copper cuff.  I wear it often and think of her every time I look at it.  Hope to see her in 2013 when I do my Grand Tour of Friends to celebrate my 50th (August - don't worry, I'll be reminding you of it frequently in the coming months so that you can bombard me with cards.  And presents)

It's no secret that I sometimes feel like visiting physical violence on Tartarus.  Well, it's QUITE often, so in June I invested in a couple of relationship counselling books.  They must have worked because we're still together. And he's still not been stabbed to death.

On the 10th of July, I began my second knitting project.  It didn't go well.   I still haven't finished the bloody thing.  To be perfectly frank, I'm right back at the 10cm of ribbing.  BUT I WILL FINISH IT.  That's absolutely one of my 2013 resolutions...... *cough*

In August we had a really lovely wedding in Aberdeen.  Incredibly posh.  The bride plays volleyball and all her friends are about 8 foot tall, whip thin things that teetered around on their high heels like newborn foals.  I bought a new dress.  It was eventful.  I still didn't stab Tartarus though.

In September I spent hours at the hairdressers and got myself a Brazilian Blowdry.  It's not poker straight, but by Jiminy (who the hell was Jiminy anyway?) I have swooshy hair and even now, three months later, I waken up in the morning and my hair looks normal, unlike my natural look.  Which is electrocuted.

By the time October came along, I was flagging and wondering whether I had any future in the bloggosphere.  Then I took Sonshine away for a few days in the October holidays and I felt inspired to write another couple of posts.  And look, it's December and I'm still here.  Here's Part 1 of the Mini Break.  I took him to Stirling.  I *know*.  Hardly back-packing in Tibet.  But with me at the wheel, any outing is an adventure......and there were Meerkats.

Then there was my bread-making workshop in November. Such excellent fun.  And no bugger would eat my bread.  And the photos that were taken couldn't be used on any advertising material because my cunningly disguised sanitary towel crept out of my back pocket and sat waving at everyone from the chair behind me.  I didn't even NEED the bloody thing.

I have regularly been rattling up a soda bread every time I've made a pot of soup.  In fact, when my family came to visit before Christmas, I made soda bread in the morning BEFORE THEY ARRIVED. I could tell by the look on my mother's face that she thought Tartarus had finally snapped and had me spirited away to a brothel in Samarkand and the vision of loveliness wafting home made bread in front of her was some kind of Stepford Wife replacement.

And that, my lovely reader, is my entire year.  That's the thing about blogging, isn't it? You record just about every fart you ever have (or in my case the odd shart) and when you look back over 12 months you discover that all you've done is start a bit of knitting and done a bit of baking....... well, let me tell you, 2013 is going to see a lot more action!

Are you coming along?  I hope so!

Wherever you are, whatever you are doing - I wish you many, many wonderful things for 2013.  There's an old blessing that I'd like to give you:  'May the road rise to meet you and may the wind be always at your back'.

'At your back'. That's always the best place to have your wind, I find. 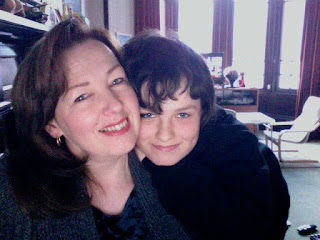 Delphic utterances by Alison Cross at 00:22