While I was out brambling* (and ripping my jacket), I found this Interesting Thing: 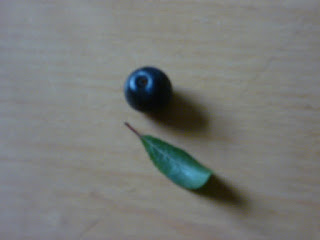 That's a glossy little black berry, about the size of a mint imperial, and its accompanying leaf.

I found a bush that had one solitary berry clinging on.  Where a bush has been stripped bare, that's a sure sign that what ever was there was really worth stripping <- foraging tip.  From someone who forages at the Co-op mainly.

But I didn't know what it was.

I had the slave Sonshine do some googling and it is Blackthorn.  Better known to foragers everywhere as Sloe.

It was growing at the side of a field and there is another tall bush (also devoid of berries!) nearby.  Although they can be planted as good thorny hedging, I think this is more a case of 'planting by bird poop'.

No wonder there were no berries left, there must be some illicit booze-making going on around here *looks round hopefully*  Christmas drinkies are going to be VERY interesting this year.

I've made a note of where the bushes are.

*more of which on Friday :-)
Delphic utterances by Alison Cross at 13:10