Yesterday was not one of my best days.

I don't know quite what was wrong with me.  To be honest, it's still lurking around the edges of me today - a bit like when you think you see a ghost and it just turns out to be a bit of stray hair in your peripheral vision.  Well, I've got a bit of a black dog in mine.

It also seems that I've transferred that black dog to the arse of my soup pan: 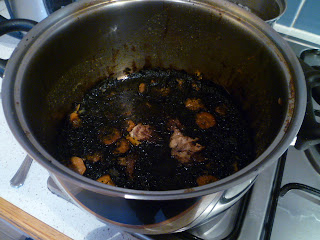 I'm sure Lady McBeth had my char-blackened soup pan in mind when she said that.

It was going to be beautiful soup too.  I had a ham hough in it, lentils, leeks, kerrits (you can just see the pathetic remains of the uncharred kerrits*).  I also had a litre and a half of home-made stock in it.  And I let it BOIL DRY.  In fact, I let it boil beyond dry:  I have, single-handedly, caused a rise in global warming.  Just wait, in years to come we'll see in the statistics that a massive spike occurred yesterday afternoon.

I was furious with myself and there was much in the way of unhappy banging about in the kitchen. Some profanity.  Mainly tears.

Later in the day, because I no longer had soup to serve up, I made a curry.  And managed to burn the rice.  Look. 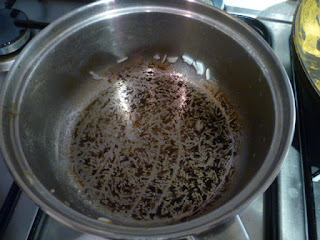 What the HELL is wrong with me.  If this is the menopause coming on, just shoot me now.

Delphic utterances by Alison Cross at 10:48