Hestia gets smooshy with Nigel

I rather like Nigel Slater.  He's sort of the TV cheffy version of Severus Snape: dresses all in black, unruly hair, that haughty and disdainful demeanour.... but deep down, you know he's one of the good guys (what?! What do you mean I've RUINED Harry Potter for you?).

What I like about him is he's quite like me.  Apart from the artisan brown-paper butcher meat and the lemons from his own garden, of course.  And the re-modelled kitchen.  But he COOKS quite like the rest of us: a bit of this, a handful of that.

I watched the latest episode of his show - all about using the stuff that's left over in the fridge to best effect:  Making the Most of It.  He had a couple of punnets of blackberries and a lovely bit of hand-tied pork something or other needing to be eaten.

I too had a bit of pork something or other.  It looked quite similar. I resolved to Do The Recipe.

Blackberries? I wasn't wasting money BUYING blackberries.  No siree.  I was going OUT in my spanky new Barbour jacket (it has no hood, wtf is THAT all about, Mr Barbour?) to pick blackberries.

The weather was kind, but finding ripe and juicy blackberries was a tricky matter.  The fact is, it's been a dreadful summer.  This year's crop have ripened late.  And in such poor weather that there's not a lot of loveliness in them.

The harvest was not without incident - the bloody insects that seem to live in the plants panicked at my picking efforts and wafted themselves into my face and bit me loads of times around the eyes.  Scotland.  It's such a wonderful place for wildlife.

I also managed to get a rip in my new jacket - a small thorn rip in the cuff.  It's less than 2 months old.  Still, at least I didn't fall in any drainage ditches.  This year.  It wasn't a lot, but I managed to get sufficient for our means.

I came home and ordered the slave small boy to get smooshing with his hands, just like Nigel did in the telly programme.  The pork was duly exhumed from the fridge and liberally rubbed with the bloody and battered fruit.  I'm sounding like an episode of CSI. 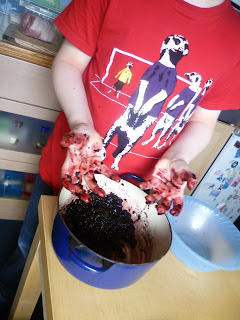 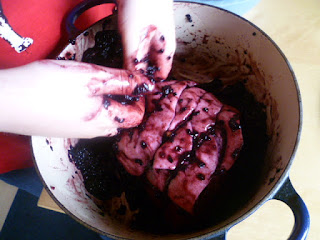 The casserole dish was popped back in the fridge and marinated for 24 hours.

The following evening I produced the joint with a flourish and Sonshine pronounced it a bit 'rubbish looking'.  But I knew that a slow cook in the oven for a couple of hours was going to turn this into something very special, if a funny colour.

Well, I hoped it would.  I was starting to forget what Nige actually DID with the pork.  I recalled that it was rested while he sliced and diced a red onion for the berry gravy.  So I did the same.  I was sure that there was something else, possibly flour, but I couldn't remember - so I didn't bother. 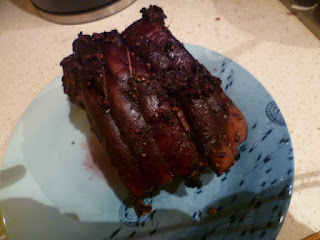 I served it with smashed pots (boiled with a couple of garlic cloves and mashed with butter). 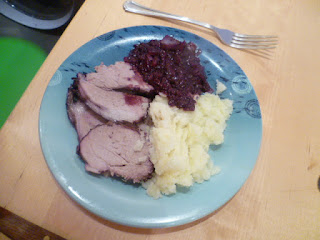 And after it was too late to do anything about it, I found this on the intertubes:  how it should be done.  Well, I was nearly right. I forgot the flour and the stock, but hey ho - we ate it and enjoyed it. And lived to tell the tale.

Mind you, I'm not sure that I have saved any money, what with the ripping of the new Barbour though...

Who's your favourite TV chef?


Delphic utterances by Alison Cross at 14:00