Last year, a whole load of fund-raising bikers from Help For Heroes came to the island and the local bikers put on a wee night for them in the Shinty Club (think: Stringfellows with splinters and the unforgettable tang of sports kits in the air).

Anyway, during the course of the evening a small teddy-bear came up for raffle.  Everyone was piddling around bidding a fiver at a time.....and Tartarus, somewhat the worse for wear and feeling expansive, bid quite a lot and won the bear.

Some days later (when the fug of the evening had cleared and he was panicking about the emptiness of his wallet) he remembered about the bear, but could find no sign of it.  'Ah, said the bikers, the bear doesn't come home with you - he goes around the world. With the Army.'


Apparently he was supposed to send us postcards, but like all kids on their gap year, he didn't bother his behind.

He materialised next to my computer when I sat down to work on Tuesday morning - apparently he had made his way to the Bike Club meeting in the town on the Monday evening and had decided to come home with Tartarus.  He brought his postcards with him.  Again, just like most teenagers.

Here he is, pictured with that other member of my extended family, Kevin the pain au chocolat who lives in the bread bin.  I know.  That experiment has gone TOO far.  We SHOULD chuck him out.  But, honestly, it will be like murdering the hamster.  So he stays.

From the pix on the postcards, he's been to Cyprus, Afghanistan and that hell-hole of bad behaviour, Australia.  There are a couple of suspicious looking photos involving undressed bears, so there might have been a bearothal involved at some point.  Well, when you're travelling with the troops, these things are to be expected.  He has also come home with a little friend.  It may have been a gay bearothal by the looks of things.  Well, plenty of room for bears chez Hestia - especially bears that fund-raise for troops! 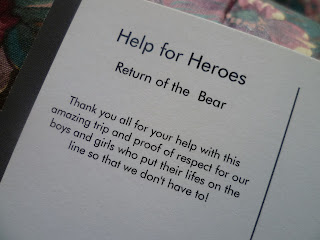 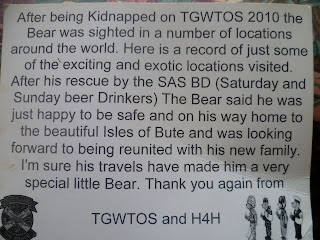 He's home with a tiny boomerang and rather a lot of hair elastics (indicating to me that the little blighter was equipped with more than a boomerang to show for his travels around the world) but that those items have perhaps been, shall we say, appropriated by the various Customs and Excise officers around the world?

We're happy that he's home for good now and that in some small way, we've supported our lovely troops.  Even if it was only in a bearothal in Brisbane.

Delphic utterances by Alison Cross at 16:37