So, I'm just relaxing with my friends after dinner, small post-prandial glass in my hand (non-alcoholic) and we're being all convivial and I'm thinking 'It's not a bad life,' when the kitchen door bursts open and Sonshine stands in the doorway looking fairly mutinous.

Well, as mutinous as you can with chocolate ice-cream smears on your nose and cheeks.

'It's nearly half past eight.  We'll be heading back down the road soon - because you've got to cycle because you insisted on coming here on your bike.'

I regarded the flailing arms and thought how much he reminded me of his father sometimes.

'YES.  THE ONE THAT I HAVE TO MAKE. FOR SCHOOL. TOMORROW!'

This was news to me.

Yes, he had spent a happy hour the previous evening drawing a complicated space ship with oxygen tanks, rockets, crew quarters etc, but there had been no mention made of actually BUILDING it.

So without further ado, I drained my glass, made my excuses to my bemused hosts and tootled back down the road.

Incidentally, Sonshine actually got home more quickly than me on his bike.  I was driving the mini.  I am not a fast driver and Sonshine was pedalling so hard to beat me that he practically vomited as he skidded to a standstill in the driveway.

As I said.  Reminds me SO much of his father sometimes.

And so it came to pass that I found myself rifling the recycling bags for empty milk cartons (whiffy), juice bottles (well, to be honest - tonic bottles), egg boxes and toilet roll innards.

A big thank you to Nibbles whose cage was raided for further toilet roll innards.

I produced the sellotape and set everything down on the kitchen table.

'There you go,' I said breezily.  'If you need any cutting of plastic or tricky stuff, I'll be in Facebook land.'

Sonshine's gaze followed my retreating form.  Well, I could feel daggers hurtling into my back as I legged it anyway.  This was not my problem.  It was HIS problem.  And he would have to sort it out on his own.

I had just turned the mac on when he appeared at my elbow with scissors and a milk carton to cut.  I did so.  He vanished.

I logged into Facebook.  He materialised again with scissors and a plastic bottle to cut.  I cut it. He vanished.

I typed in a status update.  He materialised again and handed over the scissors.  'Tell you what,' I sighed. 'How about I just abandon this and come into the kitchen.'

The scowl brightened and off we went.

Reader.  I cannot tell you how impressed I was with what he's built.  My sole contribution was doing the sort of cutting that rips your finger tips to shreds and hurts your knuckles.   We ran out of sellotape, but here it is.....

Ladies and Gen'lemen - I give you The Zeus Mark 1.0 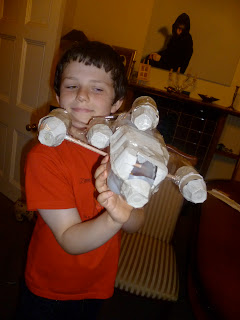 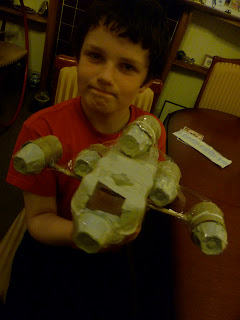 Taken with the wrong setting on my camera, but you get the idea.  And sorry about the mess of the house behind him in the photos.  It will be tidy.  One day.....


****update**** came home from school, threw himself down on the stairs and sighed deeply.  Apparently his was the most 'shit' Crew Exploration Vehicle there.  Apart from coughing and spluttering a bit at the 'shit' thing, I did explain that the others didn't leave theirs until half eight the night before it was due to be handed in.

Too early for a gin and tonic?
Delphic utterances by Alison Cross at 09:17