I decided that I was having a Kitchenaid Mixer.

OK, so I hardly ever bake, and yes, my last foray into baking resulted in a bout of gallstone pain that resulted in some rash promises to God if he would just let me survive long enough to get to the bloody doctors.  But also a lovely cake.


See?  Here it is.  Ignore the Mario figure.  That was Sonshine doing something interesting with left-over red fondant. 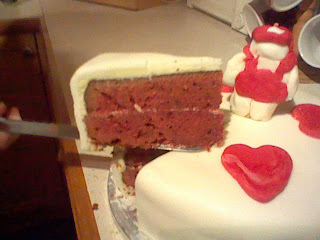 Although Tartarus balked at the price of the Kitchenaid (and I quote: ' Four hunner quid for a MIXER? Are you fucking MAD?') and, to be honest, I thought I might be too....but still, the cherry red gorgeousness of it would not let me go.

I researched the Kenwood and the Kitchenaid.

Obviously, Kenwood is a British name (waves little Union Jack brightly) and they also do some lovely colours.  I really fancied this one. 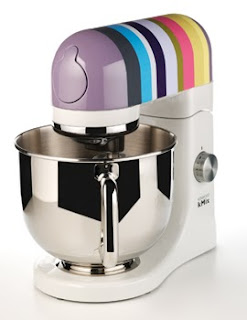 It was the same eye-watering price as the Kitchenaid and did mostly the same thing.

But then I discovered that Kenwood was no longer British (owned by De Longhi now) and that their machines are made in China.  (see: Union Jack waved now waved mournfully)

The Kitchenaid, on the other hand, is as American as the apple pie you could whip up with it.

But the clunky robustness of Kitchenaid's Artisan mixer was proving alluring...and I would be keeping some Brothers and Sisters over the pond in a job, so I decided that I HAD TO HAVE ONE OR I WOULD DIE.

(see: Union Jack in the bin)


So it came to pass that I dragged Tartarus into John Lewis to let him see the magnificence in the flesh, well, metal.  There was the red one...and next to it a Candy Apple coloured one that gleamed like a 50s cadillac.  And cost a few hundred pounds more.  Tartarus shot me a warning 'FORGET IT' glance as I ran my sweaty little hands over the Deluxe Candy Apple one.

Tartarus could not be swayed ... and wandered off to look at mixers that were, frankly, wanky.

I went into a sulk that was in no way alleviated by Tartarus subsequently treating himself to a steering wheel and pedals for the PS3.  Instead, I bit my lip, came home and began the laborious (and secretive) process of Buying On-Line.

The process itself - banging in your credit card details and whatnot - is quite straightforward, but the pressure you find yourself under to obtain the best possible deal ramps up the stress factor enormously.

I spend hours trawling through sites and using comparison sites, eyes red and streaming from hours before the flickering screen.  In the end I plumped for the John Lewis site....the machine was less expensive to order online (£399) and you could pick it up in store.  Perfect.

I typed in all my details and my card was....refused.  I admit it might be a little smokey round the edges some days from book-buying frenzies on Amazon, but it should always be ok for actually using for Real Things.

I entered all the bloody details again.  Refused.

My lovely friend Viv said on her blog that if I fell out of a boat I wouldn't hit the water....surely she wasn't going to be right again????  Was it all going to go tits up?

'Bugger you Mr Lewis.  I shall take my custom elsewhere,' I announced to the mac monitor before flouncing out and off to House of Fraser.  Reader - they have a SALE on that ends tomorrow.  I spotted my red Artisan for £377.10!!! Woopee!!! I painstakingly typed in all my details and......my card was refused again.

Now I was starting to get a bit panicked.  Visions of my Italian waiter from Saturday night's meal at Fratelli Sarti picking up his one-way ticket to Bolivia at the airport on the arm of his jewel-bedecked lady-friend - all at Hestia's expense - floated before my eyes.

The phone rang - my credit card fraud department.  All automated.  A smooth-voiced lady told me that some activity had taken place on my card and that I was to listen to the last five transactions and agree (or not) that I had made them.  There was an embarassing amount of stuff from Amazon that caused more eye-rolling from the listening-in Tartarus.  All the purchases were mine.  And my card was made active again.

But what had triggered the fraud department, I mithered.

'Probably because you were using it to buy something other than books and make-up maybe?' suggested Tartarus as he hacked away at the front door (please don't ask, but it will involve me having to do some stained glass panels at some stage).

We shall pick up my gleaming fire-engine red Artisan Stand Mixer on Sunday.

And baking shall commence....