Tartarus has been buzzing around the house like a bear with a sore head.

OK so I have mixed my metaphors, but if you can imagine a large, grumpy black bear with wings and a spanner, you've pretty much got the full picture.

The reasons for his grumpiness are myriad and not entirely unreasonable, if I'm honest.  Everything from me being a bit of an untidy worker in the kitchen to me typing up Tarot readings from Red Nose Day while the sun is splitting the sky outside....to my apparent inability to understand anything that he says correctly.

I am also a bit miffed at him.  A friend died unexpectedly when he was due home from sea and we were both supposed to go to the funeral.  However, Sonshine's guts had other ideas and the wee chap spent the night before the funeral up-chucking loudly and, might I say, rather musically, in the loo.

I decided that I couldn't go - it wasn't fair to traipse Sonshine all the way up to my mother's and then bring him home later that day, perhaps in an even worse state than he was now.

'What do you mean, 'later today'? asked Tartarus from his side of the bed. 'I don't have any plans to come back here after it. I told you we were going to give him a really good send off.'

'I know.  You're going to a hotel for the purvey after it.  I was going to do the driving so that you could have a drink.'

Turns out he had assumed that Sonshine and I would be staying at my mum's after that afternoon do in the hotel and that HE was going to go and celebrate Jim's life (ie drinking himself into a coma) with their pals.  In that case, I decided frostily, I am definitely not going (or there would be another funeral directly afterwards ie Tartarus's).

I was pretty annoyed.  He  didn't phone me directly after the funeral service as I had asked (although he did phone later).  And, to make matters worse, some old girlfriends were also there at the service.  Not that anything happened, of course.

All the same, I wonder what they think of me because I don't really drink and I don't smoke the ol' funny weed either.  A bit of a prude, I suspect.

And would he give his friends the full reason why I wasn't at the funeral or would he just tell them that I would have been a bit of a drag when the hard-core fun stuff started?

Anyway, between us there was a fair old dod of simmering resentment over the past few days.  And it all came to a head.  Literally.  In the bathroom.

Tartarus bought some hair-cutting stuff because, bizarrely,  while I can go and spend a considerable sum on colouring, blow-drying and straightening, he gets irked at having to pay a fiver for a haircut.

He experimented first on Sonshine.  The ensuing session resulted in my darling boy looking like a cross between a Belsen inmate and a refugee from Chernobyl.

Tartarus watched Sonshine scurry away to hide in his hoodie sweater.  'Maybe you should do me,' he suggested, handing me the shears.

'I don't think this is a good idea,' I muttered.

'Nonsense.  Let's go up to the bathroom where you can cut my hair for me.'

I dutifully headed upstairs, dragging my feet and exchanging sympathetic glances with Sonshine who peered out resentfully from behind the PS3.

'I really don't think I'm the best person to do this, Tartarus,' I said.

And with that, he took the shears from my hand and ran them right down the middle of his head, front to back.  He looked like Keith from The Prodigy. Only less handsome and not so green. 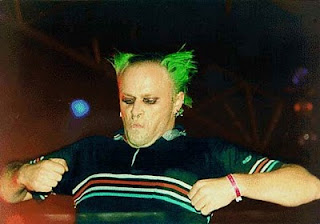 'Well,' he said, 'there's nothing to be scared of, just carry along in that vein and everything will be fine.'

I gingerly did as I was told, watching his fine pelt falling in chunks to the floor.  Eventually I got a bit blase and started using a comb, just like they do in the hairdressers.  The cut was fine.  But fuck me, it was SHORT.

Now, let me take you into my confidence dear reader...come closer...closer than that....I want to whisper something to you:  Tartarus doesn't have a lot of hair.  No.  He has that baldy thing going on where his hair appears like a pier down the middle of his head and his hair has receded like a tide either side of that pier.

His hair was now so short you could see his head shining through it like the moon on a pool.

He looked up at me from his perch on the loo seat (closed of course).  He had NO idea that this was how his hair looked.  I shifted the shears to my other hand and wiped a sweating paw down the leg of my jeans.

'It's really short, you know.' I said, preparing him for his first look in the mirror.

To say that he was gog-eyed and a bit frothy round the mouth when he saw it was an understatement.  Truly, I just followed his directions.  Thankfully no blame came my way.

But a tiny bit of me was quite delighted to see what a bum-fluffy mess it turned out to be.

Revenge may be best taken cold, but it's also damned good with hair scissors.
Delphic utterances by Alison Cross at 20:49