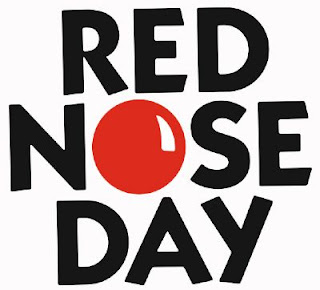 Friday was Red Nose Day, where we were encouraged to do something for money to raise funds for charitable projects at home and abroad.  Sonshine went to school dressed as Elvis and I pulled on my big gypsy skirt and hoop earrings and did Tarot readings via e-mail and facebook.

Tartarus, of course, did nothing.

He's worked in the ports of many an African country and he is not swayed by pictures of fly-flecked children with distended bellies, nor bereaved mothers weeping over tiny coffins.

By the time Sonshine kissed me on the cheek to head off to an overnight fund-raiser at the primary school (4 primary school classes - 8pm until 8am - madness!) my face looked like a boiled sausage because I'd been crying so much.

And as the night went on, the weeping got progressively noisier and snotterier.  Tartarus calmly drank his glass of red wine and sat unfazed as I worked my way through the tissues.

'You can throw money at this all you like,' he said. 'But the problems in Africa won't go away until they run their governments differently.  There's corruption like you wouldn't believe. And what about piracy? That makes our job bloody impossible down there.'

I nodded my agreement and blew my nose.

David Tennant read through a charge sheet of children in a hospital ward - all suffering from malaria.  He said that if you hadn't already donated, you should donate.

I nudged Tartarus.  'He's looking right at you, you know.  And he's from Paisley. And he was Dr Who.  You should do what he says.'

Tartarus declined (I had, of course already donated money from our joint account at 9am yesterday morning, but *ssssh* he didn't know that)

The phone lines got swamped and terrier-fringed Claudia Winkleman (I long to elastic-band up that fringe like you would a Yorkshire Terrier's) urged us to use the text option.

Jimmy Carr came on.....Tartarus perked up.....Jimmy Carr cracked a joke about how Comic Relief did send aid to 57 countries -'it used to be 58 but Somalia's pirates keep abducting people and boats, so fuck 'em.'

And there it was. Tartarus's point of view, represented at last on Comic Relief.  He reached over and picked up the phone....and texted 'yes' to 70010.  A cool tenner thanks to Mr Carr.

He stared at his phone.

'Nothing's come off the balance.  Do you think it went through?'

By this time there was another film about dying children and I was howling into my wine glass.

'Do you think I should just have used capitals like they've got on the screen? I bet you it's because I didn't use capitals, it's not gone through.'

Reader - we don't text.  When I text it takes me ages because I type things out in full.  With full grammar.

We were now awaiting Armstrong and Miller...Tartarus had heard that it was the chavvy airmen - my favourites.  By this time, my eyes were reduced to tiny pink slits in my boiled potato face.

Tartarus's phone made a wee noise.  Ten pounds had been successfully donated.

Armstrong and Miller came on and did their skit.  Not the Airmen.  Here it is:-)

Tartarus's phone made another wee noise.

I stuffed my hankie into my mouth as I watched Tartarus light up like a Christmas tree as he realised that he had actually donated two lots of £10.00 to those feckless Kenyans.

Smithy slagging George Michael couldn't have made me laugh any harder.


You can still donate to Red Nose Day - honestly, every tiny bit helps!
Delphic utterances by Alison Cross at 09:13