So, Tartarus got home last Saturday.  And he disappeared back to work yesterday.  So much for us managing to grab a family holiday....

He was home early because the ship that he has worked on for the past decade has just been sold.  He checked out all his work/leave stuff and said that he had quite a few days in hand.....but when he contacted his company on the Monday, they already had plans for him to work on another ship in Sweden.

It's not a lot of fun having a partner in the merchant navy.  You can plan nothing.  Not even your own wedding is safe from the vagaries of the Delayed Pay-Off.  *martyr face*

But on Friday there was an expanse of blue sky.  It was mild.  It was a day for getting into the garden. 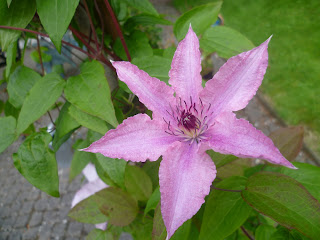 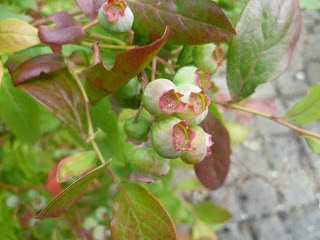 Here are my blueberries.  It's a Mexican Standoff between me and the blackbirds. I ventured into the greenhouse - there's nothing there but a vine and a couple of fruit trees.
The vine has clearly gone bonkers. 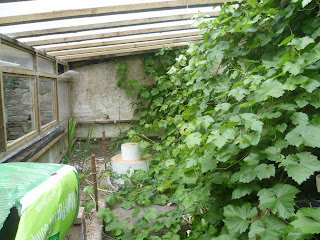 Look, the vine has reached the far away bed in the greenhouse.
And as you can see, there isn't a bloody grape to be seen. 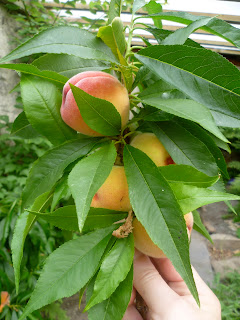 I have a dwarf peach.  And I thin it religiously, but this branch I neglected to thin properly.
And now it has snapped off.  Fruit has been taken into house to ripen next to bananas. 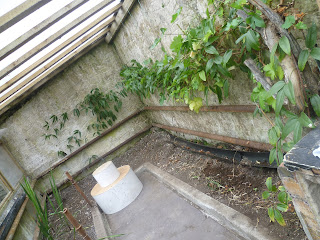 After a couple of hours, the greenhouse is looking ok.
And I can see my white jasmine-scented clematis - look, it reaches for miles! 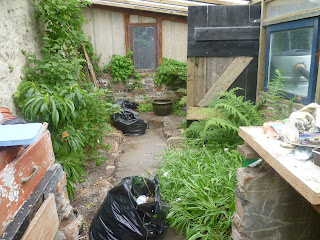 The view the other way is still a bit shit.
on the left hand side, you can see the dwaf peach and next to it...

....well that huge thing is supposed to be a dwarf apricot - but not only does it grow like a weed, it never produces any flowers.  It's coming out this year.

And look at the bloody bindweed coming in the back window.
And the big fern over at the right hand side.
*sigh*

I don't have green fingers

The knitting has ground to a standstill because I have done a row wrongly and when I tried to pick it back to where the mistake was - like THE BEGINNING OF THE ROW.

Clearly I am not a gardener nor a knitter.

Suggestions as to what I MIGHT be good at will be most welcome......

Delphic utterances by Alison Cross at 12:25