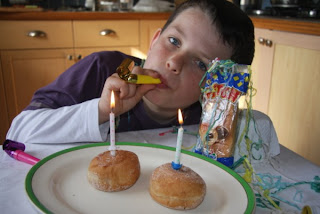 Birthday parties usually have cake, but yesterday we had a birthday party where the birthday boy IS cake.

Yes, two years after he was born, Hestia and Sonshine threw an intimate birthday party for Kevin, the pain-au-chocolate who lives in the bread bin.

The only guests were myself and Sonshine, but we had really pushed the boat out: the best Irish linen decorated the table and a matching green and white serving plate did the honours for the cakes.

Two small jammy donuts, each sporting a spotty candle, took centre stage and Kevin himself was carried, with due pomp and ceremony, by Sonshine, to the table. Kevin was then propped up on a mug, lovingly covered in kitchen roll.

We sang happy birthday. We tooted on our party tooters. We popped our poppers. If we'd had vevuzelas we'd have vevuzed. Sonshine blew out the candles and we pondered on the scary fact that Kevin has still nary a blemish on him after 2 years lying around in my bread bin.

'I think that we should call time on the Kevin experiment, Sonshine.'

'He's been here for two years and other than getting a bit shrivelled, he's never changed. He's never going to change. I think our experiment has run it's course, don't you?'

Sonshine's face had darkened into mutiny: 'I don't want you to throw him out.' he said. 'He's part of our FAMILY.'

Right. I know better than to argue with a child at a party, so I let it drop.

Just before I asked him to help me wash the dishes, Sonshine disappeared like smoke to watch TV. Seizing  my opportunity while it was fresh, I deftly popped open the swing bin and chucked Kevin in.  I felt a fleeting pang of guilt, but come ON people, this is a only a bit of CAKE!

We settled down on the sofa to watch RV with Robin Williams on DVD (very funny!) and about half way through, Sonshine excused himself, re-appearing with a glass of orange juice a short while later. Ever mindful of the fact that children in the kitchen = Hiroshima, I tootled through after the movie to clear up.

The jammy donut bag was still lying on the worktop and I tossed it into the bread bin. It then took a couple of moments before my Mummy sixth sense told me to turn back to the bread bin. I slid open the lid and looked inside, behind the Warburtons....

...and there he was. Rescued from the swing bin - Kevin was nestling down for the night in his usual place.

So, back here, same time, same place next year for birthday number 3?
Delphic utterances by Alison Cross at 09:20