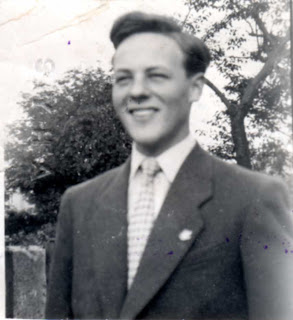 Yes, a tad unseasonal, but there is a reason for it :-)

My dad was not much into Fathers' Day.  Like Fathers throughout the western world, he could quite happily live without a card, packet of cigars or new un-rottable nylon socks.

Unlike Mothers' Day, where failure to remember a card will result in so much emotional tracer fire that you NEVER forget it for a second time.

No, my dad much preferred Valentine's Day.


When my brother and I lived at home, we'd always hope that we'd get ONE Valentine card:  a real one, not from our mother, who buzzed about, protecting our hearts from getting grazed most years by delving into her emergency stash of one-card-fits-all-situations and some dodgy hand-writing.

We'd rush in from school hoping for a card (bro) or flowers (me) from Someone Special.  Or, more truthfully, from Anyone At All, Even Ian Robertson.

Every year when dad came home from work we would have to endure his annual bragging session about getting 13 valentines cards. All in the one Valentine's Day. All from different girls.

We would stoically sit through his tale, totting up our woeful score:   Never 13,  not even if we added our meagre haul together.  Not even if we added up every card we've ever had, before or since, can we reach the magic number. Bastard.

We'd sit squashed round the wee table in the kitchen waiting for dinner to be conjured up by my long-suffering mother and reluctantly listen to the tale of how my handsome dad wooed my mum. And now I'm going to force you to endure it too.

Mum and dad met, like everyone else's parents around us, at The Pally: the local dance hall.  Mum recalls how her friends were all of a flutter when handsome Zeus (note: not his real name.  You would never make it past puberty in Airdrie if you were called Zeus) came over to ask her to dance.  She knew all about him, but didn't rate him much - she thought he was vain and self-centred - but she wasn't so rude to actually refuse him for a dance, so off she went.

When it came to the Ladies Choice that night, she wanted to ask some other lucky chap to dance, but her friends forced her to go looking for Zeus.  And when she finally spotted him, lurking in the corner,  what was he doing?  Working on his Stewart Granger poses? No.  He was picking his nose enthusiastically.  Needless to say, it didn't foster friendlier feelings in her.

Still, when he asked to see her on the following Sunday to go for a walk, she said yes.  She can't really explain why she had a change of heart, other than perhaps curiosity: the desire to see why other girls were all over him like a heat rash, maybe to make some of them a bit jealous?

Everything seemed to be going very well, and he invited her back to his parents for a cup of tea.  Honestly, this is the late 1950s in Scotland.  You could be burned at the stake for mooting anything other than tea on a first date.  She accepted and soon found herself sitting in Granny's austere parlour.

Trying to show off his best side and impress my hard-to-impress mother, my dad paused in the doorway between parlour and kitchen to ask whether she might like a scone to go with that cup of tea....and accidentally broke wind.  By all accounts very musically.

She still married him.

Oh dad, we do miss you - your rotten jokes, your tendency to make deeply inappropriate comments at unfortunate times, your iron will to complete The Herald Wee Stinker crossword before anyone else in the crossword 'club',  your big bear hugs, your stern remonstrations when I would sit and weep about being useless (at my job/relationships/changing lightbulbs), your ready laugh, your handsome face and, most of all, the ability to keep mum's QVC shopping to a dull roar. 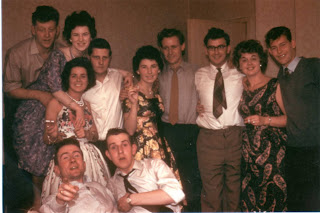 And just to show that he was just as lucky to land my mother as the other way around, Juno (again, not her real name) is in the centre of this pic delicately holding a fag.  She's never smoked.  Don't they look an absolute shower?!
Delphic utterances by Alison Cross at 17:42