Hestia and the Greenhouse massacre - update

You might recall this moment of violence against the aged vine in the greenhouse. Or this attempt at Grey's Anatomy surgery on a beheaded sunflower?

Time for an update.

Firstly, Wilfred the sunflower has now been planted outside. Against a south-facing wall which absolutely BAKES in the summer.  As you will see, he is still spindly and the source of much worry in the Hestia household.....but he's STILL ALIVE....even after total decapitation. Perhaps I need to upgrade from Hestia status to Christ?!  *waits for bolt of lightning to strike her dead*


You may also notice the twiggy stick to the right of Wilfred.  This is one of the many walking sticks picked up by Sonshine on a jaunt.  This particular stick snapped and I soothed him with 'don't worry darling, it was only a stick', only for Sonshine to retort 'He might only have been a stick to you, but he was my FRIEND!' and cued much uncontrollable crying.  We kept 'Sticky' and here he is in his first role - as support to Wilfred.  And it's not a partnership made in Heaven as you can clearly see. 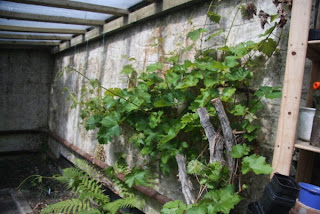 I now bring your attention to the vine in the greenhouse.  Here's a picture of it.  As you can see - IT'S NOT DEAD EITHER!!!!!! Ok, so it's not produced any flowers, but given that a few months ago I was standing weeping in front of it as it seemingly bled to death, I think it's doing fabulously.

Of course, I have given the vine a pep talk.  Up at the Primary School, they have vines that are about as long as a child's arm, each absolutely dripping with clusters of nascent berries.  And here this thing stands, year in year out, producing nothing other than leaves and spiders. And no, before you ask, I have not made dolmades with them (the leaves, not the spiders) - but now that Hestia is my split personality, I'm sure it's only a matter of time before she sets-to with a pound of mince, a couple of leaves and a bouzouki.

Here are some other garden pix for your delectation and delight on this Friday afternoon:

What Hestia's hubby renovates when he's not 'working' - the derelict bit of garden that is all that stands between me (civilisation) and some feral children on the other side of the wall....... 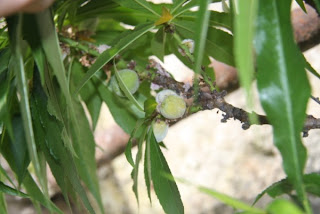 These are also in the greenhouse - they are teeny peaches!  Left the photo larger so that you can see their lovely tiny fuzziness....

My gorgeous yellow rose that resides in the polytunnel.


Strawberries! Also in polytunnel so that visiting cats do not crap on them.
Delphic utterances by Alison Cross at 14:20