Hestia is....built for comfort, not speed 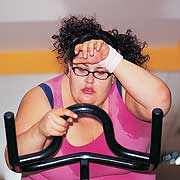 Last year, I was reliably informed that the reason I was fat/irritable/tired all the time/bad hair etc is simply because I have allowed myself to turn into a troll, not (as I had perversely hoped) a dicky thyroid.  But doctors, what do THEY know?

It was at that point I decided to take up some form of exercise, or die trying:

Swimming was out because there was too much defuzzing to be done on a daily basis and life's too short to be constantly trimming one's badger.

Gym is out because one is compelled to listen to someone else's music at ear-bleeding volume - plus I don't like machines with someone else's sweat on them.

This left me with one other option....taking up jogging.

It was with heavy heart (and re-inforced sports bra) that I set off through the wood.  More of a walk than a jog, my initial attempts eventually rewarded me with the ability to jog the 2 miles there and back without too much hassle, in about 40 minutes.  Not Olympian, but still better than lying on the sofa eating Cadbury's flakes and watching Jeremy Kyle.

Then winter came.  I kept on jogging, but it was grim stuff. At one point I was in such a bad way (sleet in the face for a mile can make you very lightheaded!) that the bin men offered me a lift home.  I lay on the sofa for months, but not even Hestia had the stomach for Jeremy Kyle.

My running shoes were consigned to the back of the shoe cupboard along with strappy sandals and an ill-advised pair of crocs....

....and there they have languished until last week when I decided to have another go at turning from troll into trollop by the medium of exercise and portion control.

It's not going terribly well, to be honest.  It now takes me 40 minutes to do the 2 miles using a mixture of walking and jogging...and today it took me 45 minutes doing mostly jogging. I conclude that I am sloooooow. The sofa and the flakes are once again looking tempting...but I shall persevere. And, just in case you think you might like to get out there too, here are Hestias dos and don'ts of jogging:

DO - time yourself - you will start to see improvement.  Some day.
DO - walk when you're feeling like a stroke is imminent.
DO - say hello to the dog walkers
DO NOT - fall into step with the dog walkers.  Being outpaced by an arthritic labrador is humiliating.
DO - take time to look at the flora and fauna.  You're only out for a jog, you might as well enjoy the view.
DO - take a carrier bag with you to pick up litter on the home leg
DO - wear a red t-shirt so that paramedics can spot your lifeless form on the path
DO - leave a note of your route and departure time (just in case.  that's all I'm saying.  just in case.)
DO NOT - wear anything with headphones.  You will be mown down by cyclists and it will be your own fault.
DO - keep yourself safe
DO NOT - let anyone persuade you that in 'a couple of months' you'll be able to run a marathon. You won't.
DO - sign up for a 5km fun run or walk - especially if you can walk it.
DO - watch where you are putting your feet.  Cleaning dog crap from the sole of a running shoe is a torture from the Inner Ring of Hell.
DO - wear a really good sports bra.
DO - wear layers
DO NOT wear anything lycra down below.  There's nothing a boisterous Alsatian pup (approx 6 stone in weight) likes best than a sweaty crotch.  I speak from bitter experience.  We nearly had to get engaged.
DO - have fun!
Delphic utterances by Alison Cross at 13:21