In which Hestia has been into the greenhouse 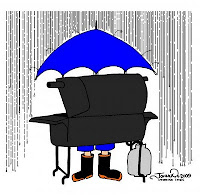 I've got a pretty big garden. And Willie is slooooowly concreting it to hell when I'm not looking.

His latest attempt to batter the garden into some recognisable shape is the 'covered bbq area'. This was mooted to me as a great way to enjoy a garden bbq without our food getting wet.

Now, I've known Willie since we were 16 and he's never been motivated by a dry char-coal steak in his life. I suspected foul play.

And I was right.

He told his friends that it was actually a car port, disguised as a bbq area.

I ought not complain when bits of the garden are nibbled off to be concreted over, because it's a few feet less that needs weeded.

Yesterday, in unseasonably gorgeous weather, I decided to brave the polytunnel and greenhouse.

Neither of these had been properly opened since November and, I am ashamed to say, the ol' dead tomato plants from last summer were still gently swinging like dessicated corpses from their bamboo canes.

Anyhoo, I spent the day ridding the polytunnel of mouldy tomato plants and endured spore-filled lungs in the process. If I die of some unknown cause - make sure that I'm checked out for Botrytis and possibly greenfly infestation.

The most harrowing point of the day was my entanglement with the vine.

The vine is about as old as the house and takes up the entire length of the 20' greenhouse. It never produces any grapes and I had promised Willie that THIS year, I was going to really lop it back.

Maybe. But I didn't want to kill it and if Prince Charles can talk to his flowers then I can do a spot of pre-surgical chat with the elderly greenhouse resident.

After lunch I found the wood saw and started sawing at the three gnarled branches. It took an hour to saw through them and I really had a fight with each of them to get out through the greenhouse door to the Recycling Point (where I put all wood through the chipper).

The branches were a lot heavier than I had anticipated and as I hauled them onto my shoulders to get them out, the old gnarly fingers and bends caught a hold of very bloody pot and bag en route to the door. Truly, it was like dragging an unhappy child out to school.

I stood with my afternoon coffee in the middle of the cleared greenhouse, a slight glow of perspiration upon my brow and on my t-shirt (bound to have shifted a few calories with all that effort) when I heard a steady drip-drip noise.

It was the vine - it was crying. From each of the newly cut stumps, the sap rolled down like tears. I felt like some kind of criminal - one that goes about beating the crap out of elderly vines.

Today I am filled with remose. Am I mad to feel so bad about what I've done to a plant?

Have I killed the old vine or revitalised her? I don't know. But I've taken a picture of how she looked today and, if she survives to the summer, I'll take another picture to show how she has survived.
Delphic utterances by Alison Cross at 15:07