I cannot tell a lie, after a pant-filling moment at Tescos a few weeks ago when the check out girl had to repeat that my trolley of stuff came to £99 (did not include so much as a chicken leg or bottle of booze)  I have been automatically going to the reduced sections in the local Co-op.

It came to pass that I bought two small aubergines for 39p each and I was determined to do something Ottolenghi-ish with them.  But since I can't quite get my hands on most of their other ingredients, I threw myself upon the culinary expertise of my Facebook friends.

The first up with a suggestion was Anton The Italian.  She regularly posts up yummy looking pix of food that she has prepared and she suggested the following:

Slice your aubergines, fry them until they are soft in a pan.  Tip a can of chopped tomatoes (I used some with ready added herbs), some chilli* and some garlic into a pan and cook into a sauce.

Then pop the slices of softened aubergines into a dish, tip on the sauce and cover with slices of mozarella. 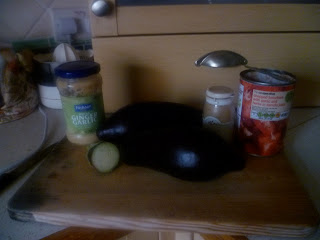 There is clearly something adrift with my camera and honestly, I have not shot all this in soft focus!  The large dark dog-poop looking thing in the middle is two aubergines.  The jar of garlic and ginger I can commend to the house - we use it in everything.  Please don't look at the colour of the chili.  Just let's say that the expiry date was in Roman numerals. 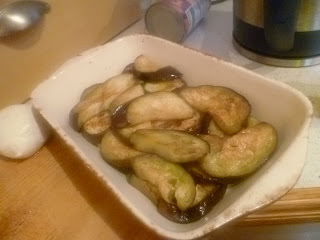 Here are some soft-focus fried aubergines.  They don't half soak up a lot of oil.  I eventually started feeding the frying pan with water to try to cut down the amount of olive oil I was using!

Small white ball is actually a 50p mozarella waiting to be sliced.  Ignore the fallen over empty tin next to the kettle.  Look, I never said that I was David Bailey. 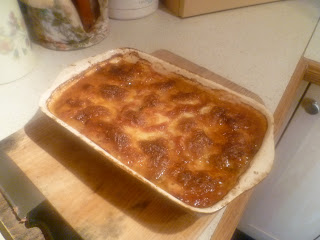 It tasted DELISH and I commend it to the house.

*I used chilli oil AFTER the dish was cooked because two small boys were going to eat it and I didn't want to put them off.  The chilli is v important as it really lifts the dish - so give yourself a nice drizzle and enjoy it!!!

And to everyone else who gave me aubergine recipes - they are copied down and I will use them at a later date.

Are you buying from the marked down section of the supermarket too? Do you get a sense of satisfaction from creating a nice meal from inexpensive ingredients?
Delphic utterances by Alison Cross at 12:38