I know, I've been shamefully neglecting you because of boring tat like tidying up for Tartarus coming home and because, rather spectacularly, I've made Sonshine's outfit for World Book Day.

The theme that the school set for today's celebrations was 'Nautical' and other than Captain Jack Sparrow ('mum, there will be hundreds of Captain Jacks'), Long John Silver (suggestion met with an interested eyebrow lift but I didn't think I could whittle a wooden leg in time) or Jim the cabin boy ('mum, no one knows what Jim the Cabin Boy should look like')....he opted to go as his father.

Tartarus may be many things but a character in a book or indeed the skill of authorship are not on his horizon.  Plus, his Chief Engineer's hat (think: officer and gentleman) is languishing in a brothel in Chile and his blazer has an ominously fousty-orange smell from hanging in the wardrobe for the best part of 30 years without being worn.  Plus, if Sonshine took his Chief Engineer stripes to school and lost them, I would be a dead woman.

So he reconsidered his options and went for Popeye.

I have NO clue whether he's ever featured in a book, but I'm pretty sure that there's a DC Comic out there somewhere featuring the spinach-swigging sailor.  Well that's my story and I'm sticking to it.

And here he is: 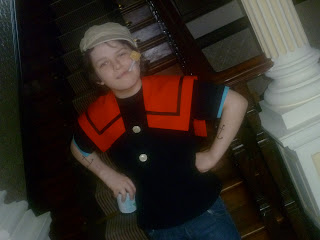 I do not know what has happened to the focus, but it's the best I could come up with.  Maybe my batteries are flat.  The answer to most of my life's problems, methinks.

Let me take you through the costume.  The hat was purchased from the only shopping emporium in town, The Factory Shop, for £1.00.  It is too small for him, but it was all they had.  It was this hat or a motorbike helmet - which I'm pretty sure Popeye did not wear.

The top is his black KISS concert t-shirt turned inside out with two yellow buttons (40p for two) from the shop that sells wool and patterns from 1972.

The red material I actually bought from Remant Kings in Glasgow on Saturday when I was up there leading a Tarot workshop.... along with some black ribbon.  None of it is sewn - that God for Wundaweb and a hot iron!  Think the material and ribbon totalled about £6.

I stood in the middle of the shop and said 'I don't know what to do, can someone help me?' and a very nice girl led me to the red cotton and the black ribbon and cut me various lengths.  I hereby recommend them to dress-making virgins everywhere.

The pale blue sleeve edges are a baby's t-shirt from the Oxfam shop that was cut up and pressed into service  at the cost of £1.00.

The spinach tin is actually a tin of butter beans with a spinach label, created by Sonshine.  The Tattoos are biro pen.

THE PIPE is actually made out of a corn on the cob (yes, just like the real one) that I dried in the oven and sanded into a pipe barrel.  I even carved out the inside like a real pipe.  The stalk is a pencil covered in parcel tape.

I actually need to lie down now.

Before I go:  He came home from school and announced that he was playing Barnaby in the Easter Story.  'Barrabas?' I suggested.  Yes! he replied.  Apparently he had wanted to be Judas Priest but someone else got the role.  'Judas Iscariot?' I offered.  'Yes, that's what I said.'

What are you doing for World Book Day?


Delphic utterances by Alison Cross at 09:14