Lying in bed this morning, listening to the rain chuntering down through the downpipes and splattering on to the driveway from our neighbour's roof, we heard what can only be described as a Bit of a Bang from downstairs.

Sonshine was up and padding around in his dressing gown and stripey socks and we had heard him humming a little hum to himself as he disappeared into the kitchen to make his breakfast.  This is usually half a packet of breakfast cereal and 3/4 pint of milk or, a smaller bowl of breakfast cereal and some lightly warmed bread with an inch of peanut butter and jam.

There is always a glass of orange juice, diluted with tap water.

The noise sounded EXACTLY like a glass of orange juice thunking off the floor and depositing its contents up the back door, the walls and carpet.

Of course, we have been known to be wrong, so we continued to lie chatting about the horror of the ladies sitting behind me at The Descendants last night (more of which in another post).

When we deigned to grace the floor-head with our presence about quarter of an hour later, we discovered a large sticky puddle in the kitchen, some light orange juice redecoration up the back door and wall....... and this at the side of the sink: 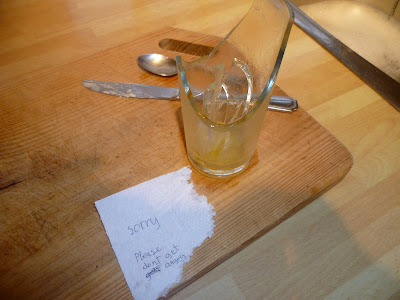 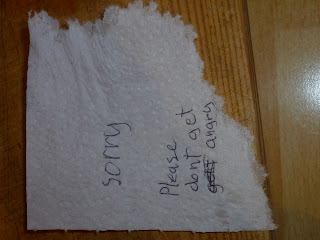 I couldn't be fagged joogling around the image, so just twist yourselves sideways to read it.

I blame Tartarus because he's a Big Bad Wolf most of the time.  But I am not completely blameless myself, what with being Hestia, our Lady of almost Perpetual Menstruation (And Attendant Grumpy Moods) quite a lot of the time.

*hangs head in shame*  I did have a go at Sonshine yesterday for doing something wrong when he was trying to help me.  Even as I said it, I knew I was being unfair, yet I didn't bother to apologise.  Isn't that awful?

Delphic utterances by Alison Cross at 11:54