Hestia and the land that I forgot....

It embarrasses me enormously to admit to you, dear reader, that I have not been in the greenhouse since last September.  OK, if I'm being brutally honest, July.  *hangs head in shame*

And this why it  looked like THIS when I opened the door this morning.

It's bad isn't it? Honestly, I expected to be taken down by a couple of little velociraptors that may have been hiding out for the winter in the undergrowth.  In fact, my undergrowth was actually overgrowth. 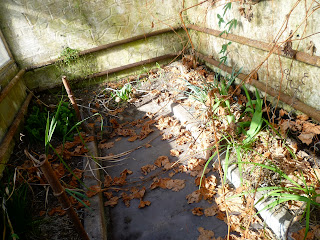 Standing in the middle, looking left 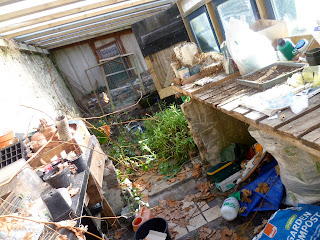 Standing in the middle looking right.

There were no flesh-eating dinosaurs but there were loads of these.  LOADS: 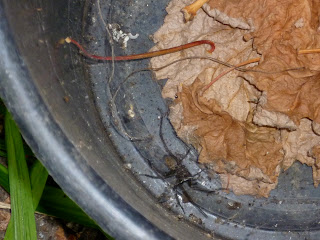 This one was about the length of my index finger and I confess to letting out a strangled yelp as my BARE HANDS came into contact with it.  I *know*.  The sheer BRAVERY of gardening without gloves.

He's still in there.  Spiders are our friends.  Even big scary ones.

Within a couple of hours it was restored to this: 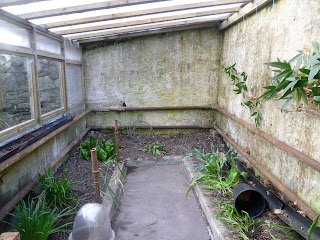 See that black bucket?  That's Spiderville in there. 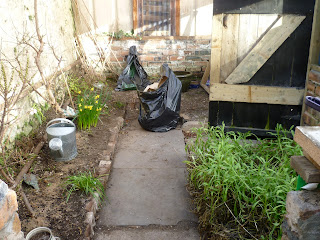 Three bin bags filled with detrius - including a whole carton of blood, fish and bone meal that had got soooo damp that the whole box just disintegrated all over me when I picked it up.  Same with my Bordeaux Mixture.  What IS Bordeaux Mixture anyway?

There are some signs of beauty in the greenhouse: 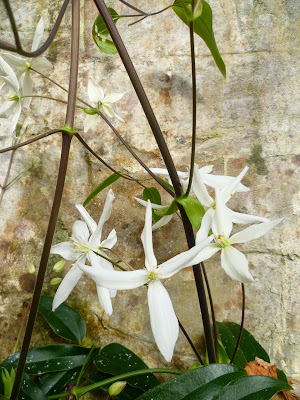 This is a jasmine scented clematis that has scrambled through my worthless vine.  It smells DIVINE and clearly thrives on neglect. 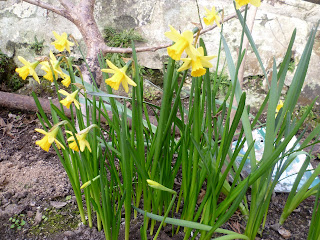 A tiny cloud of Tete a Tete narcissus. 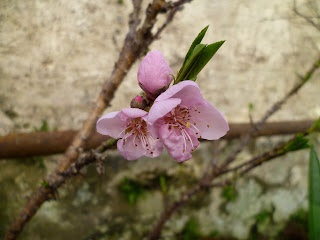 The dwarf peach tree is already starting to flower - this is why I need bees, there's bugger all flying around to pollinate this little thing.  I used the tip of my index finger today - we shall see what fruits result! 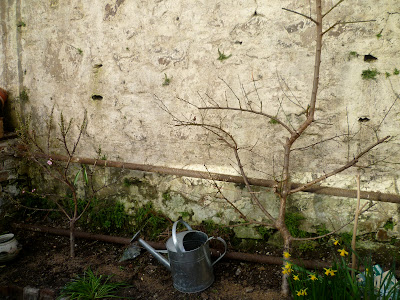 The tiny little tree on the left is the dwarf peach, the very tall straggly thing on the right is SUPPOSED to be a dwarf nectarine.  Dwarf, my arse.  I had to cut the top off it or it would have been through the greenhouse roof.  It's never yielded so much as a runty little fruit.  So it's coming out *waggles secateurs threateningly in its direction* 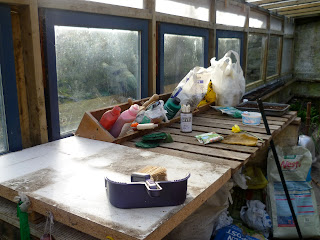 One REASONABLY tidy work surface.  Don't. Look. Beneath. The. Bench 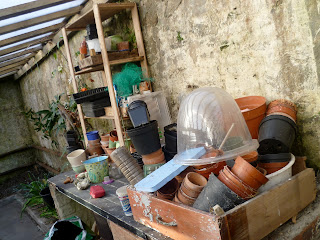 This one is....less tidy, but still better than it was when I started scything it all into shape before lunch.

The most successful thing I seem to grow in my greenhouse is spiders.


Delphic utterances by Alison Cross at 16:57