Hestia..... enjoys an evening out 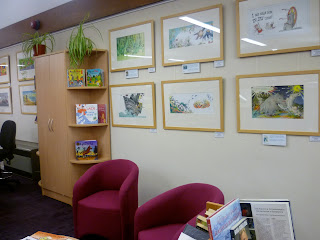 It wasn't really an EVENING out.  You can't call going out at half past five 'The Evening', can you?

In fact, can you call any event at the local library A Evening Out?

Especially if it's on a Wednesday?

I got myself gussied up (ie clean) with smart trousers, an unstained sweater, a full face of make-up and a squirt of perfume and headed to the library.

Sonshine was with me.  Working his new black skinny jeans and t-shirt look (pre-EMO, I think we're calling it), he looked rather smart - if a little bummed out at having to leave behind his beloved Minecraft (see: men who live with their mothers playing computer games).

I dragged him along as a necessary evil because this exhibition was all about illustrations from children's books.  Although, I wasn't sure whether a small boy as accessory was a Good Idea or not because it was the Cheese And Wine Opening of the exhibition.  I don't normally drink when I've got the Disapproving Child with me, so I seriously thought about sneaking out for an hour and letting the internet babysit him.

But then, it was all about kids' books.  What if I turned up and was the only adult not to have brought their rug rat with them?

I decided to take him.

We were welcomed at the door with glasses of wine (orange juice for him of course) and basically let loose on the exhibits.

The exhibition was curated by Julia Donaldson, the literary GENIUS behind The Gruffalo, Room on the Broom etc.

Working with the hugely talented Axel Scheffler, Donaldson gathered together some wonderful samples of contemporary childrens' book illustrations. The exhibition is touring around, I think, Scottish libraries (but possibly also libraries Darn Sarf too).

It is a work of two parts - this half includes a selection of divinely illustrated envelopes that Sheffler created for his letters to Donaldson.  If I had been her postman, she would have seen NONE of them - they are all simply addressed to 'Julia Donaldson - Glasgow'!

Look at them in their joyful playfulness.  I think I'd like to be friends with Axel Sheffler, just looking at his envelopes, wouldn't you? 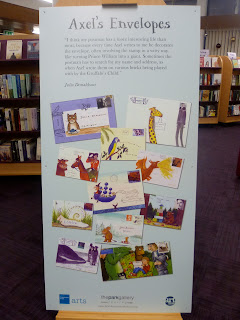 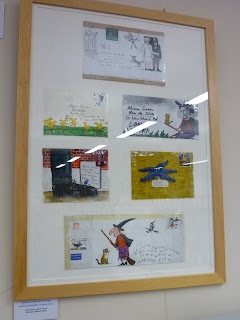 And the artworks included in this section of the exhibition could be defined as non-Scheffler.

This disappointed Sonshine enormously.  He was only there for the Gruffalo.  But the Sheffler artworks form Part le Deux of the exhibition, coming in a fortnight.

Reader, I had a lovely time.  Several glasses of wine and some unexpected loveliness with friends that I hadn't seen for a long time (one with her Brand Spanky New Son).

I was rather partial to these two - what do you think?  Sorry about the strip lighting ;-( 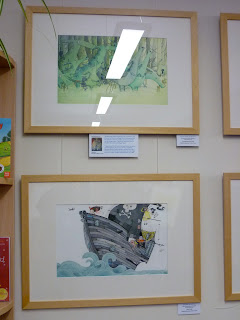 Here are my two favourite images from this part of the exhibition.  I would happily have bought these. 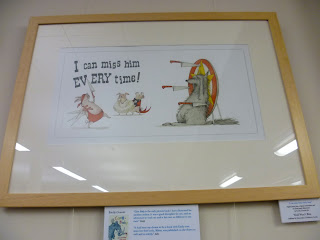 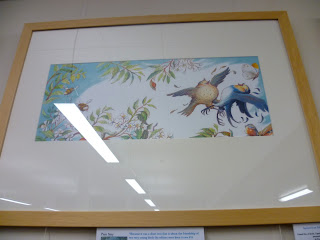 This is also a pen and watercolour of two bluebirds having a swinging time.

At half past six (yeah, I am living the rock and roll dream) Sonshine and I buttoned up and set off into the cold wet night.

Back in the cosiness of the house, we began to unswathe ourselves from our wintery layers. 'Did you enjoy that?' I asked from deep inside my scarf.

'Eh, it was alright,' shrugged Sonshine, sinking back into his room to take up the Minecraft where he had left off.

For the second part of the exhibition, I shall leave him behind and take a really nice handbag instead.


Delphic utterances by Alison Cross at 12:34