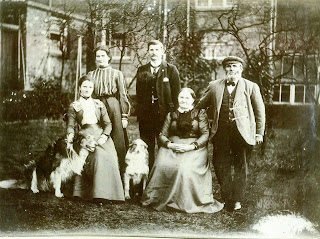 Tartarus and I have been interested in the history of our house since the first moment we stepped through the front door as eager house-hunters and found ourselves standing in a mosaic-tiled hallway staring, slack-jawed at the Victorian splendour of it all.

Of course, it wasn't all fabulous.  The kitchen was basically a sink on a base unit and the kitchen carpet made odd tacky sticky noises whenever we walked over it.

Still, we were not put off.  The pair of us have vivid imaginations and while he could see his beloved car and bike in a yet-to-be-built garage...I was envisaging myself sweeping down the grand staircase in the manner of Scarlet O'Hara in Gone With The Wind.

In fact, if the previous owners had left us any curtains, I would have made a frock out of them for that exact purpose.  But they did not even leave us any light-fittings when we arrived, so the frock/curtain was never made.  Pity.

Over the years we've picked up bits and pieces from people who knew the house when they were children and once, people came from Cheshire to see it.  Their great-greats used to come and stay at the house for their summer holidays.  They kindly posted us up photos of their serious-faced relatives in loose tennis dresses standing in the garden.

The other night, a man appeared at the door and introduced himself to me as the great, great, great grandson of the man who built our house.  He had lots of photos of the house, might I be interested in seeing them?   Does a bear shit in the woods?

Later that evening he appeared laden down with colour photocopies of sepia-toned photographs and scratchy 70s photocopies in a folder.

Reader, I was transfixed.

Mr Hunter was a master-builder and owned large swathes of property around the town.  He was also a VERY big fan of the temperance movement.  He must be spinning in his grave every time Tartarus sways his way home from the bike club!

And there are LOADS of fantastic photos of their huge family and BEST of all there are photos of the inside of my house.  Richard, the man who owned the photos, and I walked around the house and were astonished to realise that we have put much of our furniture in the same position as the Hunters.

I am now in the process of scanning many of the images so that we have good records for the house so that if we ever sell up, the next owners will be able to meet the house's ancestors too.

And finally, my favourite image - the classic Wean And Dog pose that has graced many a chocolate box: 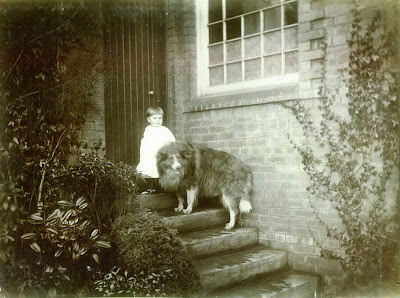 I went to bed that night feeling incredibly peaceful now that I know my house's family.  And now I've got names to call out when I think I see a fleeting shadow in the hall. 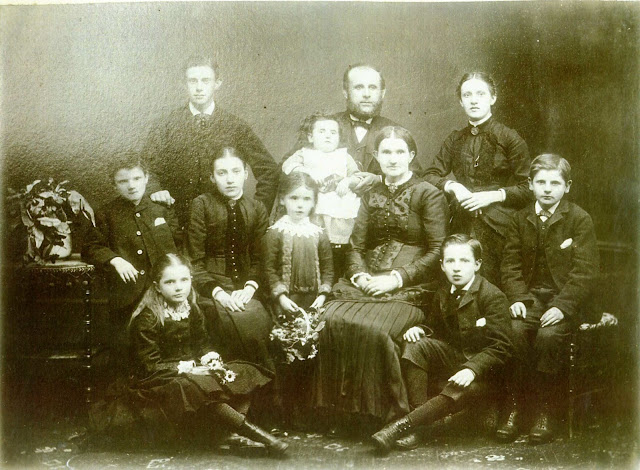 Here's another one for you - four sons and five daughters!  No wonder Mrs Hunter looks tired :-D

Delphic utterances by Alison Cross at 13:52