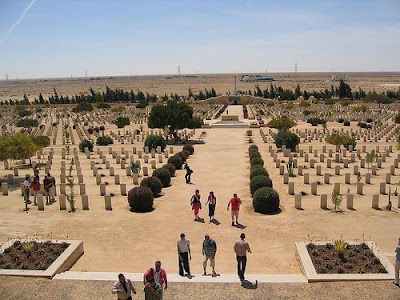 There is a map, in a bible, where the black type-face, El Alamein, has been worn away to pale grey by years of family fingers pressing against the paper.  As if touching the name could somehow take them to some foreign field.

There is a photograph.  A serious-faced, good-looking young man smiles out, his army cap at a jaunty angle over his cropped hair.  This is James. To me, now, he's only a child, barely out of his teens really. As were they all, I suppose.


My gran (his aunt) had the sepia-toned photo pinned up on her living-room wall, next to the TV when I was a child.  The yellowing mount carefully held in place by strategically placed thumb-tacks.  I was terrified of it.  His gaze followed you all around the room.  I couldn't even hide behind my doll's pram - every time I peeked out, there he was, watching and smiling.

When she was a young woman, my mum recalls buying her mother flowers from her wages every week.  One day at the florists she saw something unusual and beautiful.  She bought a spray and took it home to her mother.  It was mimosa.

After a few days my gran sat my mother down and squeezed my mother's hand over the kitchen table.  I hope that you'll not be offended, hen, said my gran, but I've had to throw those flowers out.  Not offended, but curious, my mother asked why. Because they smell of death, said my gran.

We've always been a family prone to the overly-dramatic statement.

But my mother never bought mimosas again.  For anyone.

And so the years passed.  My gran died and the photograph was carefully unpinned from the wall and slipped into an album. No longer could James's gaze watch our lives unfold; he became confined to the pages of a book.

There is an envelope that contains a folded up handkerchief.  It's a clean but rough handkerchief. No-one uses it, of course.  It was James's handkerchief.  It was one of the few things sent home to his utterly bereft mother.  Whenever it is unfolded, as it sometimes is when the now-elderly cousins try to make their cousin live and breathe again for us, we can see and feel the grains of sand from the desert still amongst its fibres.  We don't talk about how he died.  Whether it was in vain.  Whether the sacrifices were worth it.  They talk about him as their Big Cousin with his cheeky chat and sense of humour.

They can look upon his photo and touch the sand as well as the name on the map.  But it was never enough.  Not for his family.

A few years ago, an elderly cousin of my mother's went a cruise to the Mediterranean and one of the day trips offered was a  coach outing to the military graves at El Alamein.  She and her husband decided to go and try to find James's grave.

There were over 70,000 men of many nationalities killed at the two battles of El Alamein and she despaired of finding anything that would help them find James.  The coach rattled out from the blue harbour, through the bustling city and out into the flat, pale, almost featureless desert where the Desert Campaign had raged all those long years ago.

Of course, everyone on the tour was looking for someone's grave and they had to wait for access for the books that they needed to examine.  The first book that was given to her to leaf through was one of the books for surnames beginning with M.  There were several books for the Ms.

Like I said, we're a family prone to the dramatic moment.

Out they went into the stifling heat and made their way to the plot, camera at the ready.

And so they found his unremarkable stone in the unremarkable lines of other stones.  Line after line of brilliant white stones gleaming in the heat.

And there was a tree growing over his grave.

My aunt didn't know what the tree was, but she took a photograph of the grave and the tree, picking off a few of the distinctively serrated leaves for the other cousins to keep as mementos of the visit.

When she returned home, she presented my mother with her leaves and asked my mum if she knew what the tree was.

Delphic utterances by Alison Cross at 11:52