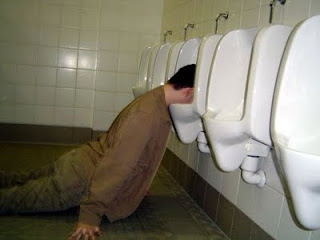 So, ok, I've had a little bit of fun at the expense of the people who were convinced that the universe was going to end on Saturday.  It actually gave me a little pause for thought and today's blog submission was going to be all about the power we each have to start our lives afresh - every day.  And how we should draw a line under all the bad shit in our lives up until Saturday and treat Sunday and every day thereafter as a beautiful gift of life.

Yes, well that's what I was GOING to blog about until I went up the hospital to get my dressings removed this morning.

Like most folks, I aimed to get there earlier than my appointment - because it's nice to be prompt, right? So I braved the gale force conditions and struggled up the hill to the hospital.  I arrived looking considerably more dishevelled than I had left the house.  I looked like I'd been wrestling with badgers in a hedge.

I made myself known at Reception only to be told that Casualty were running 'a little behind schedule'.

On entering the Waiting Room, I was smacked in the face with the most gawd-awful stench - alcohol, dirty body and something undefinable but which made me remember Sonshine's direst nappies.  Three 'normal' people sat in the Waiting Room and one distinctly not-normal person, from whom the smell emanated.

The not normal person was male, unshaven and - it has to be said - clearly unwashed.  A grey face, crumpled from too much life and drink wobbled uncertainly above an abolutely manky sweatshirt.  His sockless ankles, just visible beneath the elasticated cuffs of his jeans were filthy, badged with scabs and bruises, stuffed into ancient training shoes.  He sort of focussed on me briefly as I sat myself down in the furthest away corner from him and then continued rolling his cigarette.

Just as he was about to put it to his lips, the other normal woman reminded him sharply that this was a hospital and that he'd need to go outside to smoke it.

Unfortunately for her, he decided that was his opening gambit for conversation.  It appeared that his friend had indicated, the previous day, that he'd quite like to jump off the pier and Mr Smelly had responded loyally by saying that he would jump in with them.

A very uncharitable part of me wished that he had because a fishy smell would be less offensive.

I suspected that the friend was the reason that the normally humming Casualty Department was like a ghost town at this side of the hospital.  Somewhere, down that corridor, lay another drink-addled body, so fetid and so unhappy that they'd rather be dead.

I found a hankie in my pocket and managed to persuade myself and the rest of the waiting room that I had a terrible cold that required the said hankie to be kept at my nose all the time.  In truth, I was using it to keep out the smell.

From over the top of my Red magazine, I surveyed the not-normal person and wondered how someone can get into that state. And, VERY uncharitably, I wondered whether his life-choices were currently being funded by the Bank of Dole.  He would never be fit to work.

I recalled working in the jobcentre and how galling it was to see people pulling down in benefits in a week more than I earned working full time in a month.

Mrs Normal turned her attention to me: 'What time is your appointment?' she asked.

'11am' I replied, hoping that I wouldn't be waiting much longer.  'When is yours?' I asked.

'9.30 am' she replied glumly.  Oh hell, I wouldn't be getting seen this side of Christmas at this rate.

We three sighed and returned to our reading.

Mr Abnormal staggered to his feet and went out for a smoke.

The waiting room door to the outside was left open and we gratefully gulped in lungfuls of fresh air (and bits of leaves and small birds) as the stormy winds plucked at the poor trees in the park across the road.

We were joined in the Waiting Room by a teenager who rang the bell for x-ray.  A nurse materialised like a djin.  'Who rang  for X ray?' she asked. The boy raised a heavily bandaged paw.  'Well, you have to go to Casualty first and there's a bit of a delay, about an hour, hour and a half.'

The teenager sat for ages staring at his boots and then got up and went out.

He did not return.

I had now read Red twice and was, once again, studying Mr Smelly who was now sitting weeping quietly and uncontrollably into his Old Holburn tobacco.

At this point, dear reader, I wish I could tell you that my icy heart thawed and that I comforted Mr Smelly and I proved myself a decent person.  But I did not.

At six minutes to midday, with precisely NO-ONE else having been taken from the Waiting Room to be attended to, I decided that I would rather have a bash at ripping off my dressings in the security of my own bedroom rather than endure further arse-numbing sitting around on the Waiting Room's plastic seating.

'I've got to be, erm, in the town in 15 minutes,' I lied to the Receptionist as I stood to go. 'It was only to get my dressings removed anyway - if I get stuck or there is Unpleasantness, I'll make a new appointment, is that ok.'

'I'm really sorry about the hold ups,' said the Receptionist holding up her hands in the universal gesture of 'it's not my fault, but what can you do'.

'It's ok, these things happen.'

I zipped up my jacket, pulled up the hood (it wasn't a fashion icon day) and grimly set my jaw to the elements.

'Goodbye hen!  Hope you get your dressings off ok!' shouted a single voice from the Waiting Room.

The only person to say goodbye was Mr Smelly.
Delphic utterances by Alison Cross at 16:12