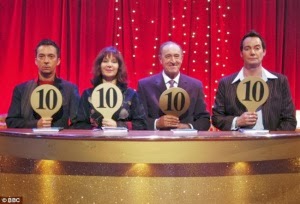 Don't you remember the torture and bliss of social dancing.  We used to call it Country Dancing, but Country is a word that is just begging for trouble when it comes to being uttered aloud so the schools have changed it to the much more acceptable 'social' dancing.

Sonshine is learning all manner of jigs and reels and whatnot and it has spawned a welcome interest in using the shower much more frequently as he shufties his small armpits into the faces of willing victims partners as they spin around the hall.

There is so much Lynx body spray in the bathroom that it is peeling the silver from the back of the mirror and flies are dropping...well, like flies.

But gosh, the wee fella does scrub up lovely.  Every morning that I know there will be dancing, our final conversation before he leaves the house goes like this:

'Please ask CA to dance today.'
'No,' he replies, jamming down his hat and striding off into the mist.

I remember what it was like, back then.  DESPERATE for the current bloke du jour to look my way. If he was a brave enough soul to shuffle across the yawning chasm that was the Games Hall from where the boys lurked to where the girls stood nervously, he was worth his weight in Golden Wonder crisps.

Mostly Mr McNaughton or Pa Broon would stand at the boys side of the hall and usher them towards us in manner of sheepdog herding and, basically, you just had to hope you could catch one as they skittered by.

Sometimes I caught a nice one.  Other times I didn't catch any.

The humiliation was great if you ended up sitting on the long low wooden benches that edged the hall, picking at the hem of your skirt and pretending that you didn't mind.

I don't think any of the boys that asked me to dance fancied me at all.  I don't know that the boys thoughts had turned that way yet.  By the time they did show an interest in us, ours had all turned to boys in upper classes of the school - we wanted the cool sophistication of a 5th year or a 6th year, not the spotty snottyness of our classmates.

In S2 all I wanted was to get up onto that floor with a guy beside me and be whirled around like I was at a grand ball in Vienna, not the gym hall that always smelled vaguely of rubber mats.

An the agony of being asked to dance by The Boy You Loved, only for Mrs Steele to announce that it was a progressive and he was swept away from your arms and lost forever in a tide of outstretched white shirts and squeaking plimsolls!

This was second only to the agony of Strip The Willow - everyone's favourite dance - but my GOD was it sore on the upper arms.  Sonshine has been well-briefed:  The girls will have spent a lot of time and effort to look gorgeous for the dance, don't ruin it for them by birling them so hard that their feet lose contact with the floor and they end up embedded in the set of people dancing next to you.  She won't thank you for it and your opportunity of being picked for a Ladies Choice will be vanishingly thin.

Sonshine is desperate to dance with CA, but will not risk the ridicule of his friends by asking her.  So he asks every other girl but her.  When I point out that his friends are not ridiculing him for asking the other girls, he just shrugs and says that I don't understand. That school has changed A LOT since I was there.

School probably has, but girls haven't.

I BEG HIM TO DANCE WITH HER.

On Thursday he came home from school, his little face shining like a new penny.

'I walked down the road with CA from school!' he beamed.

I was so shocked that I had to sit down.

'What did she say? What did you find out about her? Do you have stuff in common?' I rattled on, breathlessly.

'Did you not ask her things about herself?' I ask.  Suddenly aware that Tartarus's genes are also rattling around inside my son. Believe me, small talk and chit chat is quite beyond him.  Even now.

'What exactly did you say to her?' I asked.

'Well, I said that L* had been going past the X cafe** and through the window saw the guy servicing COUGHING while making up a carry-out meal.  And that a bit of STUFF had come out of his mouth and onto the carry out food!!  And that he picked it off and ate it again!!'

'Your first proper conversation with CA and you spoke about THAT?'

I cannot reply because I have slid down the wall and am now a groaning heap of thermal clothing and slippers.  curse you Tartarus, your genes are to the fore.


Delphic utterances by Alison Cross at 14:54