So we gets into the car and heads off in the general direction of Telford Conference Centre. I say 'general direction' because if you've ever been to Telford, you know that there are eleventy-billion roundabouts, none of which seem to take you in the direction that you have carefully planned.

And lo! it came to pass that I ended up hurtling down a leafy country lane thinking to myself, 'this is definitely NOT dual carriageway.'  A swift 3-point turn (well, 5 point turn) had us back on track and we turned onto a roundabout that was so stacked with traffic that it could only be the parental cars of small gamers heading to Insomnia 49.

We queued and queued only to be told that the car park was full and that we should head off to the overflow car park.....which was back down the wrong turning that I'd taken 3/4 of an hour earlier.  Of course, you know what happens next.  Overflow carpark is full.

By this time I have huge sweat rings beneath my armpits and my knuckles are white.  Where on earth can we park?  I haz a brainwave.....and drives to the Holiday Inn hotel, next to the Conference centre.....and into its blissfully car-free car park.  Now, I'm no dummy, I high-tailed it to Reception to ask for a parking token or to offer payment, but the gorgeous girl on duty said that it was free to park.  I wanted to have her babies, I was SO grateful!

This meant that we had a two minute walk to the conference centre.

Reader, I was trepidatious.  Neither of us had ever been to a Gaming Festival.  I had brought my book (The War of Art, if you must know), my specs and plenty of cash for coffee and buns.

We walked gingerly into the main trade hall where every kind of game known to man was available to play....you could test new products that were not yet on the market, like this Occulus Rift which was so excellent I was SCREAMING like a girl and wobbling about from side to side as I became fully immersed in a roller coaster ride inside the helmet. 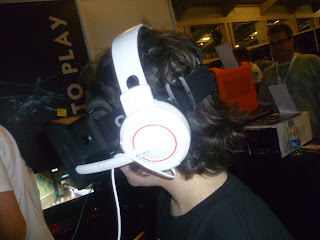 Occulus Rift - when this goes on sale GET IT!

There was a retro gaming arcade where, for another tenner, you could play arcade games ALL day.

Upstairs was the restaurant and lots of board games (or bored games as Sonshine calls them) and this was where Sonshine pissed away lots of his money on raffle tickets and plastic Things For Your Desk That Don't Do Anything.

There was a Cosplay competition (A competition where you costume-up as a gaming hero) and THIS Griffin costume won.  You could SIT on it.  The eyes moved and it had WINGS.  Am dreading Sonshine asking for this for Hallowe'en. 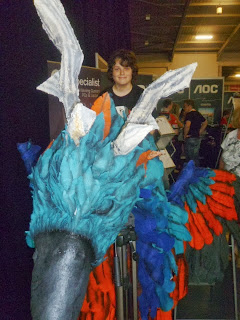 And then the Gaming Hall.   And it alllllll became clear why it was called Insomnia - the kids game alllllll night!  Yes, there was a pizza delivery service TO YOUR COMPUTER CONSOL, sweeties, endless cans of juice and a surprising level of trust - handbags (yes, plenty of lady gamers!) left dangling over the backs of chairs, jackets and purses on display.  One can't help thinking that if it had been set in Glasgow, all these things would have been spirited away in a hastily balled-up tracksuit top.

Security was very high at the event all round.  The gig ran like a well-oiled machine and felt so safe that I quickly let Sonshine do his own thing while I retired to the main hall with my book.

Then the main hall presentations started and suddenly I was hooked on the stop-mo videos that had been made of Minecraft cities.  The video makers were greeted like conquering heroes as they ascended the stage and pretty soon my book was discarded as I listened to them talking about how they made their cities.

But the hall was filling up and I couldn't see the main screen too well.  A brainwave! Sit on the BACK of the chair and get a few vital inches.  Fablas!

'hey!' shouts one gamer on the stage 'Let's take a 360 degree photo for Notch* and post it to facebook for him.  Everybody - wave!!'

Reader, I raised my hands above my head and wooped with the mad gamer weirdos.

And landing with a huge BANG on the floor.

All eyes turne to me, sprachling like an upturned beetle on the floor, chair tipped over, legs up in the air.  A couple of teenage gamers rushed to my aid and I did that oddly defensive LEAP to my feet shouting: 'I'm FINE, I'm FINE! Don't worry, I'm FINE! Thank you, I'm FINE'  While all the time unable to breathe because all the air has been knocked out of your lungs... and your arms feel like they've burst straight through your shoulder blades.

The chair was put upright and I disappeared back into obscurity and my book... 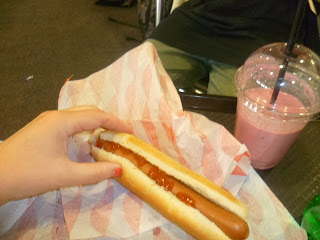 Lunch was a high-class affair

Sonshine arrived in a short while later, curious to know about the new friends that I'd made.  Yes, every man and his dog came up to me to ask whether I was, in fact, alright.  I explained to Sonshine who looked extremely relieved not to have been in the same room as me when it happened.

All too soon 4pm came around (our agreed departure time) and making my way through people who were STILL asking me if I was alright after my fall, we headed back to the car and had an uneventful drive home to the hotel. 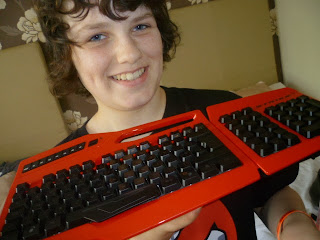 Sonshine and his gaming swag

PS - the black suede shoe was no-where to be seen.  The guests had alllll gone and we got a BRILLIANT night's sleep :-)

And he wants to do it all again next year!  Over to you, Tartarus!


Delphic utterances by Alison Cross at 11:49