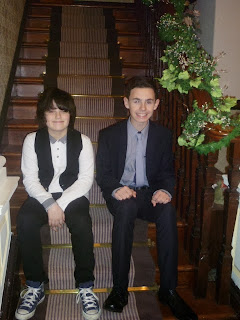 My S1 school dance was probably before you, dear reader, were born.  Unless you are also 50 in which case we probably endured enjoyed it at the same time.

I was so excited when Juno agreed that I could have a long dress!  My friends told me about their frocks - various scarlets, electric blues (what can I say? It was the 70s) and even one in BLACK which was very, VERY daring for a 12 year-old.

I don't remember the actual buying of the frock.  I might not even have been present because I can't imagine that I would have willingly selected what I wore to the dance that night.

Yes, it was a long dress. But it was BROWN.  Very dark brown.

In the dimly lit Town Hall, I was like a little polyester short-haired turd.

Why was my hair short?  Well, for the millionth time, I had contracted head lice and Juno had decided enough was enough and my hair was cut off.  Not that it was terribly long at that point, but it was cut off VERY short in what I can only describe as An Old Lady cut.

When my dad came to pick me up from the hairdressers afterwards, he walked straight past me.  Yes, it was THAT bad.  I'll give you another example of how bad it was - I went to the local corner shop with my short hair and the man behind the counter called me 'son'.

That's utterly crushing when you are being battered severely by puberty in all other areas.

Juno decided to 'style' my hair for the dance.  This I remember with a vividness that borders on the psychotic.  Conditioner was not yet known in Scotland, so my short, coarse hair was to be battered into submission with the aid of rollers.

These were not some poofy sponge things, but pink and blue spiky things that looked like hedgehogs on acid.  They were pinned mercilessly to my head and I was enveloped by the Hair Dryer Hood.

Our hair dryer was about the size of your average Sky Box and operated by dials - one for on/off and the other had three settings cold, hot and Surface Of The Sun.  This could be casually worn on the shoulder while your head was ensconced in something that resembled a shower cap for the Mekon. And when you turned the hair dryer on, the cap inflated.  And you looked like the Mekon.

It was a dicy operation - put the cap on wrongly and you had a 'crown of thorns' indentation right around your forehead from the elasticated band of the cap.  Frankenstein's monster is not a good look for a school dance.

And the tightest curly hairdo this side of Shirley Temple in an electric chair.

Juno combed and back-combed me telling me how marvellous I looked.  Yes, if I was going to a school dance in 1953 I probably looked smokin', but in the 1970s.....it was a complete disaster.

I begged her to fix it, but there was nothing that could be done - my hair was too short, the curls dried too tightly.

Dad drove me down to the town hall and we sat in the car in the December darkness waiting for some of my friends to arrive.

'You look lovely,' he said encouragingly, but not convincingly.  I wonder whether he knew how awful I felt.  I did not have the dark swooshy loveliness of Chantelle, nor Seona's mane that gleamed copper like a racehorse's haunches.  AND I had a brown dress.  AND a big mark on my forehead from the hair dryer.

Some friends arrived and I quickly hopped out of the car and into the puddles of light cast by the street lamps.

I fastened on to a group of girls in my class who were dressed, to my mind, like birds of paradise. Their frocks were gleaming satins and their hair fell in soft ringlets around their faces and their cheeks were aglow with the excitement of Boys Nearby.  To their eternal credit, no-one mentioned the deep dent that ran across my forehead like a lobotomy patient.  Nor the frock.  Although there might have been some whispered giggling about my hair.  They were 12.  It happens :)

Of course, I did get danced that night, but not by The One.  The One wore black trousers and a purple shirt and purple tie.  Look, it was the 1970s - that was FASHION. He wore his hair in a pageboy cut (also fashion).  I loved him with the quiet desperation of a girl who still read The Bunty.

So, when Sonshine went out to his school dance last night, he wore his hair whatever way he wanted (he didn't want it trimmed) and he got to pick whatever clothes he wanted to wear. He looked totally different from his friend - but it was by CHOICE.

He was sent forth into the wicked stormy night with one instruction from me:  There will be a girl there tonight whose hair isn't right and whose frock isn't right and who will be pretending that it's all ok. You must ask her to dance.'

And bless his cotton socks, he did :-)

Delphic utterances by Alison Cross at 18:59