Of course, being only a purchaser of mince, bacon and the odd slice of liver, I nearly DIED when the butcher told me what the 3lb of fillet beef would come to - £54.00!!!!

But what a hunk of gorgeous meat!  Besides, I hardly ever see my bro - so I didn't begrudge the money at all.  But WHAT a price!

On the Friday before they visited I made the Tiramisu (the Sainted Delia Smith version) which was easy peasy, but took a lot of bowls.  And Sonshine and I ate quite a lot of the mixture before it ever made it to the crystal fruit bowl that was doubling up as the dessert dish.

I also roasted off the meat.  My big mistake was phoning my mother to ask how she wanted her beef wellington done.  Well done. WELL DONE.  A cut of beef that should be served practically still mooing at you was now to be rendered GREY.  ah well.  I have to give them what they want.  So I roast it off for longer than Gordon Ramsey suggests.  Also longer than what Legend suggests.   I am aware that I am ruining the meat.  I press on.

I prepare all my vegetables - parsnips for mashing with nutmeg, carrots to be roasting with coriander and potatoes boiled for roasting.

The roasting of the taters is giving me palpitations. I have been having nightmares about getting it wrong.  I recall trying to do it once before and ending up serving people rock hard, parboiled potatoes that dripped goose fat.  This time would have to be perfect.

I was up to midnight primping the table, working out the timings for everything on a little bit of paper that I tacked to the back of the kitchen door - eventually I collapsed into bed, fingers crossed that the weather would be good enough for them to make the ferry crossing to the island.

At 7am the following morning I awoke with the sudden realisation that I still had a ton of stuff to do!

The veg were duly prepped, the actual beef wellington was assembled....all systems were ready.  Heck, I even made them some fresh soda bread to accompany the soup!

My friend Elaine delivered a dozen festive cup cakes at 10.30am.  I attended to her with my hair clipped up in a million different directions:  'I'm straightening my hair,'I explain helpfully, in case she thinks I'm working my inner Helena Bonham-Carter. 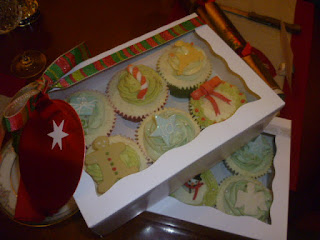 I look at the magnificence of her cupcakes and realise that no one will ever, EVER believe that I made them.  I'll have to tell the truth when asked - I admit, it's a blow to my veil of carefully cultivated Christmas domesticity.

There is much kissing and exchanging of gifts.  There is Bucks Fizz.  There is a general ripple of familial appreciation that I have Pushed The Boat Out.  These people know me.  They are surprised not to be getting fed a plate of mince.  Or lasagna. 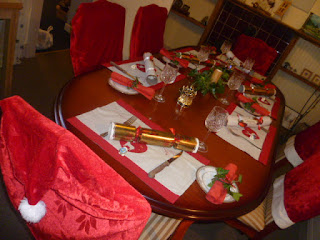 The Christmas table.  Don't worry, I put that binbag in the bin before they arrived :-D

On the tops of Sonshine's and my brother's heads are visible as they sit, hunched figures on the floor exploring the new LEGO Mindstorms 2.0 that they have bought him.  Sonshine is ecstatic.  He doesn't get to see his uncle very often - once a year at most.

They stay until 5pm - we talk a lot. We laugh a lot. They tell me how much they have enjoyed their meal.  That the roast potatoes were gorgeous.  That the meat was perfect.  That I CAN actually cook.  Of course, I shall not tell Tartarus this - why bark yourself when you've got a perfectly good dog, that's what I say.

I realise how much I miss seeing my brother on a regular basis.  His hair's totally grey now, but he's still that little boy that I use to fiercely protect at school.  I look at Juno (who has, amazingly, not even been mildly irritating today) and see how arthritis is deforming her hands.  The hands that love to paint, to make greetings cards and to cuddle her grandson (who is becoming increasingly recalcitrant in that respect recently).

Sending you squashy hugs from Scotland.


Delphic utterances by Alison Cross at 17:51