'I'm a bit shit at knitting.' I confessed on facebook.

'Do you want me to organise a knit-along with my daughter, to keep you company?' came back the reply.

Reader, her daughter is 9 years old.  Not even *I* can take being bitch-slapped by a 9-year old at knitting.

'Find me some wool.' I asked - utterly clueless.  One doesn't call it wool any more, it is YARN.

Viv, another crafting genius with more faith in me than is good for her, found a lovely wool yarn and with some clever recalculations from Ania regarding how many balls I would need, I ordered - right then and there - before I could change my mind.

The wool yarn arrived and it was gorgeous! I couldn't WAIT to get cracking - so off I trundled upstairs to find knitting needles in the correct size.  It's funny that, isn't it?  You don't knit, but you are fairly sure that somewhere in your home you WILL find the right-sized needles for your project.....

Anyway reader, I came across a TON OF SHAME.  And because I am prepared to share EVERYTHING with you (other than the spartan details of my cob-web filled sex-life) here is My Drawer Of Shame...... 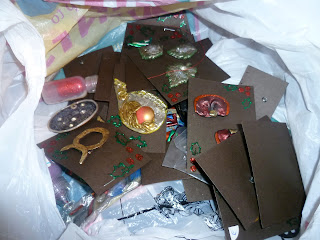 This is a supermarket bag so old that the supermarket no longer exists. It is filled with jewellery made for a craft fair.  Now, this must have been around 1993, just after Tartarus and I separated.  I was looking for things to do and went to an art class. With my mother.  There I met the most wonderful artist called Linda and at some point she persuaded me to take a stand at a local craft show.  I made loads of jewellery from fimo plastic (you melt it in the oven or boiling water).  I did it for charity.  The earrings were £2.00 per pair. 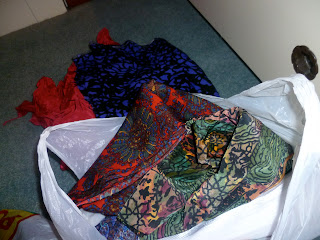 Another plastic bag - this time filled with bits of material.  I can tell from the patterns that this was the 1980s.  Tartarus had bought me a sewing machine for my Christmas and I bought lots of material to experiment with.  The following summer, we got engaged and went to Greece on holiday.  I had made myself several pairs of shorts - long shorts, almost like skirts.

It was only a few months ago that he confessed that he had hated those shorts and wondered about the wisdom of getting engaged to someone that would not only MAKE such monstrosities, but actually WEAR them. 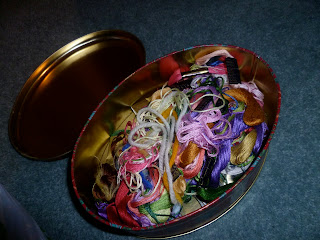 Threads for a long-forgotten embroidery project.  I keep 'em neatly, don't I? 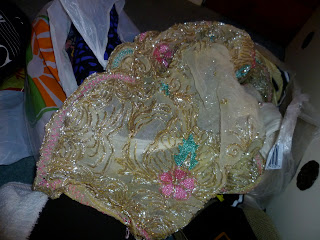 This is an Indian outfit.  Purchased at a wee charity shop in Shawlands in Glasgow where there is a big Asian community.  I think it's a very full skirt and a sort of veil.  I thought it might be a good Tarot reading outfit for when I wanted to turn on the 'bling'.  I washed it by hand and pretty much ruined it.  But thought that I 'could do something with it'. Think this was about 2003. I 'haven't done anything with it.' 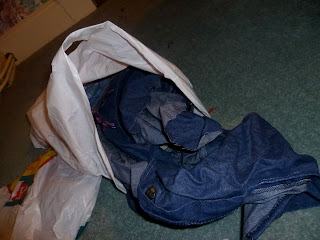 Cut up denim for a rag-rug.  Which never made it out of the carrier bag.  You cut/rip into strips and braid together.  Then you wind into a cartwheel and stitch in place.  Yeah, that's the THEORY.  Again, this is a 1990s project, I'm sure. 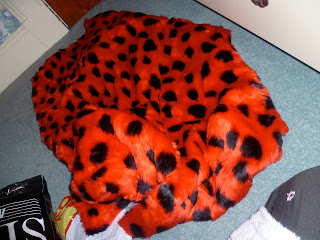 Red ladybird fluffy stuff, purchased when Sonshine was in a pushchair and was SUPPOSED to recover a small granny-ish looking footstool. I thought I'd change it into a furry ladybird.  I don't know WHAT I was thinking.  But I clearly didn't do it and the footstool became my bum-rest for my intermittent bouts of meditation. 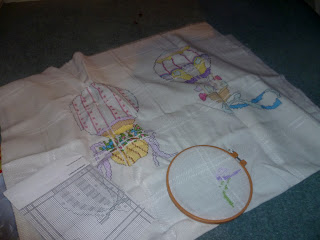 This is one of the projects I am most ashamed of - it was an embroidery kit. For a pram cover.  Just for the record, he's going to be 12 this year.  I was enjoying the sewing....until I started watching Gone With The Wind whilst sewing and instead of that balloon going UP the way, I started sewing it ALONG the way.  The unpicking almost broke my heart.  It certainly broke my spirit and the project was shelved.  But it really is beautiful. 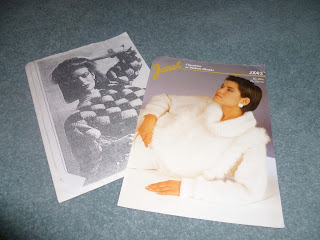 Knitting patterns.  Are these yours, cos they're not mine.  So Eighties.  I did actually persuade someone to knit me that checkerboard style jumper.  I wore it to death.  It was blue and pink. I *know*.  My taste is dubious.  But it was the 80s and none of us had taste, right? 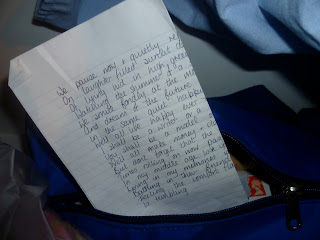 The Bag.  This is the bag that, in the event of my death, one of you must immediately remove and destroy all the contents. It is full of bad poetry, love letters, break up letters, valentines, poems written to me in Elvish....yeah, can you Burn Without Reading please. 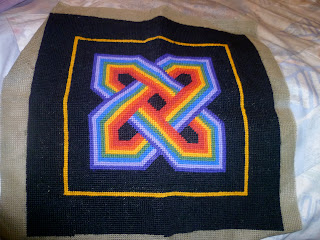 Tadaaaaah!  A tapestry cushion cover.  Of my own design.  For a cushion.  Clearly never made it any further than off the frame.  But ALMOST finished.  1990s. 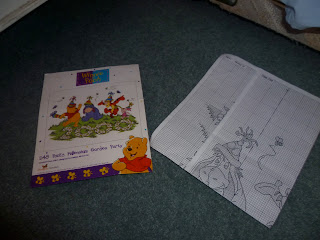 Another shameful project.  A Disney picture that was supposed to be for Sonshine.  It came with a Setifikit from Disney and EVERYTHING - Even the correct Disney colours for Pooh.  I don't even know where this embroidery project is, but the threads and the pattern are in a Somerfield bag in The Drawer Of Shame.....

But putting all THAT aside - I did find the right-sized needles and began the Knitting Project:

Here's my knitting project on Day 1: 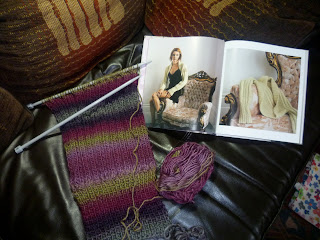 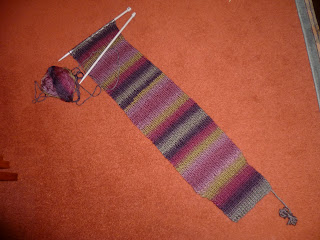 I have GREAT hopes that this one will be completed.  Great hopes.......

So, am I the only Bad Crafter In The Village - or do any of you have a similar Drawer of Shame?


Delphic utterances by Alison Cross at 10:08