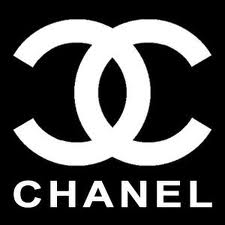 Forty one years ago today, the couturier and perfumier Coco Chanel died at the age of 88.

I've just finished reading Justine Picardie's biography of Chanel and found it a totally absorbing read.  Well-studded with photographs and reading fluidly, almost like a novel, Picardie's investigation into Chanel and her tangled background has been extensive - exploring everything from the fishing records from the Duke of Westminster's Scottish estate to the diary entries for Cecil Beaton.

And it really is a tangled but sparkly net that Chanel left behind.  Picardie doesn't set out to paint The Real Truth about Coco, because Chanel ruthlessly cut out and unpicked her past as mercilessly as she restitched her suits in the atelier at Rue Cambon.  Instead she lays out the various tales that Coco told, especially about her past, like frocks on the bed, and shows us all the beautiful work - some of it completely fictional - that Chanel created.

Relax! I'm not about to launch into a fashion blog.  Heck no!  Given that I am sitting here dressed in a ripped black polo neck, thermal vest, stylishly 'worn' trousers (with thermal leggings underneath), I am SO not the person to write a fashion-based piece!

That said, I did try on a classic little Chanel suit once.  It did absolutely nothing for me.  I looked like your maiden aunt - the one who works as a librarian and lives alone with 14 cats and photos of her 40 year-old hacking pony next to her bed.

It was deeply unflattering across a fuller bust,  transforming me into a short and stocky little brick.  Albeit a little brick with a Chanel suit.

This biography is a great read and doesn't shy away from some of the less attractive stories about Chanel (namely taking up with a German officer during the war and invoking Nazi-inspired property law to help lever some of her perfume business out of the hands of the Jews who ran it) and many little nuggets of the detail for even the walk-on walk-off characters in Chanel's life will remain with you long after you have slipped the book back onto your shelves.

That's the extent of my review!

What *I* wanted to talk to you about was Chanel's interest in the esoteric.  Did you know that her divination cards sit where she left them, on her dresser at the flat at Rue Cambon?  And that she selected the name for her eponymous fragrance because 5 was her lucky number?

I say 'divination cards' although Picardie does refer to them as Tarot cards.  However, they are not Tarot cards, but Lenormand cards - oh yes, there IS a difference.

And from what I can tell,  her Lenormand cards were the set known as The Red Owl (on account of it having a stylised red owl on the card back).

The Lenormand deck comes in many forms, but all are named after the top-notch French diviner of the Napoleonic period, Madame Marie Lenormand.

The decks were extremely popular in mainland Europe as divination tools.  However it proved less popular in the English-speaking world (it's still quite difficult to find books in English on the Lenormand).  The Red Owl issue is still in production today (by German publishing house Konigsfort)

Coco was certainly aware of the power of symbolism because she had been brought up by nuns at the Aubazine convent.  Indeed, Picardie painstakingly shows us how many aspects of the convent where Chanel spent most of her childhood undoubtedly influenced her style - in both symbolism and austerity.

This particular Lenormand was first published around 1920;   Intriguingly, she created her iconic perfume Chanel No 5 within 12 months of the deck being published.

Now,  of course, there is nothing to say that the numerology of the Lenormand influenced her choice of name; perhaps she was given these cards MANY years after their 1920 publication date.....but it's an interesting fact, nonetheless, don't you think?

Although information about Lenormand is quite sketchy (mine comes from the Lenormand Oracle  book by Sylvie Steinbach) but from what I can glean there are several similarities between the life of Marie Lenormand and the life of Gabrielle Chanel.

Both girls born (I think!) reasonably close to each other (Lenormand - Alencon, Chanel - Saumur)
Both girls were brought up in convents but did have siblings and extended family
Both spent some time in London.
Both worked as experts in their fields with the upper echelons in Parisian society - Lenormand not only worked with Napoleon and Josephine, but also the Revolutionaries Robespierre and Marrat.  Chanel not only dressed the great and good of Parisian society, she dressed the wives of German officers AND Jaqueline Kennedy.
Both women never married.
Both women were childless.
Both had nephews who greatly benefited from their wealthy, famous aunts.
Lenormand is considered France's greatest cartomancer of all time.  And Chanel its greatest designer.

Was the little designer aware of any of the similarities between her own life and that of the card-reader? Probably not - or else JP would have sniffed them out for the book, without a doubt.

But Chanel WAS superstitious and the number five was her lucky number - the perfumier, Beaux, who created the scent recalled: ' I came to present my creations, two series No 1 - 5 and 20 - 24.  She chose a few, one of which was No 5.  "What should it be called?" I asked.  Mademoiselle Chanel replied, 'I'm presenting my dress collection on the 5th of May, the fifth month of the year; let's leave the name No 5." This number would bring her luck.'

She had also been influenced by the Theosophic system, introduced to her by her lover, Boy Capel sometime after they met in 1909.  Picardie wonders whether the numerical value of five 'as a representative of the fifth element, the legendary quinta essentia of the alchemists' could have had some bearing on her attachment to the number?

And what does Chanel's beloved Lenormand deck have to say about the number five? 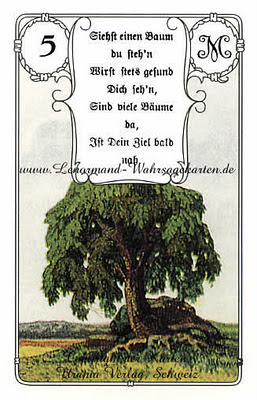 This is an image of the card used in Ms Picardie's book.

Translation of the card's text, from the German (taken from 'Coco Chanel' by Justine Picardie)

Your goal shall soon be near - how fab would THAT be to receive as a message when you are just about to launch a new fragrance?!

Interestingly, the interpretation given on the site from whence I purloined the image says:

The Tree shows you your own roots
Keep your good health and the good circumstances in life!
This includes also maintain relationships with old friends.
Don´t be self-destructable!!
The tree of knowledge, or the tree of life - he shows you how and where you are rooted. Where your problems are or where have found your security in life.

Chanel was the consummate Fan Dancing expert as far as hiding her own roots was concerned - show a little here, hide a little there, fluff things up a bit, keep people guessing! Paradoxically, symbols of those hidden roots can be seen in her designs - everything from the interlocking double c of her logo can be traced back to images that she must have been aware of (at least subliminally) at Aubazine.

The tree shows you your own roots: the thing that grows - Chanel's empire - shows her own roots.

Delphic utterances by Alison Cross at 19:50