Hestia...goes on with the Show

No, the worst thing is having to drink a gin and tonic at 11.15am and then saunter around the Show trying not to look a bit squiffy.

Of course, no one MADE me drink the G&T.  But when someone produces a hip flask that they've filled with gin ESPECIALLY for you, it seems churlish not to drink it.  Even when you've been fasting for a day and only had a banana for your breakfast.

Sonshine stuck to my side like glue.  Even during the G&T moment.  He looked somewhat disapproving, but I bought him a burger for his lunch, so that mollified him somewhat.  Besides, he got two cans of Dr Peppers. 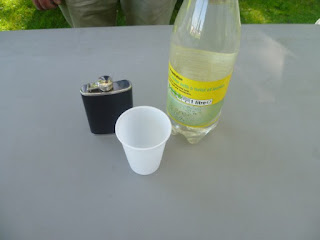 And here's the Raptors.  I cannot tell you how much I love birds of prey.  Perhaps my ongoing desire to hand-rear a crow might give you some kind of clue, but I ACHE for owls.  And when the Raptor man produced this...... 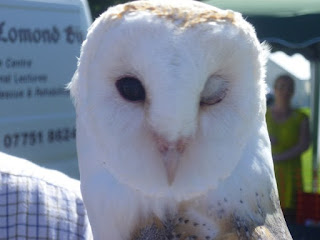 I nearly SQUEEEED out loud.

As it was, Sonshine was dispatched to pick up all owl and hawk feathers for me.

There was also this.  A European Owl.  He didn't do much.  Just sat and looked fed up. 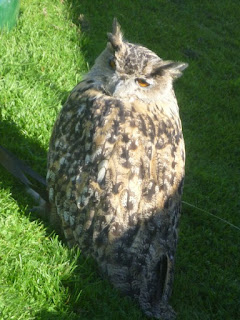 And this.  This is a Golden Eagle.  I included the behind of the Raptor man so that you had some idea of the scale of the thing. 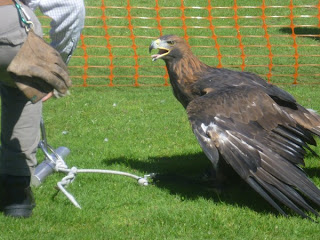 And this.  Some kind of hawk.  Sunning itself to get its Vitamin D up to speed. 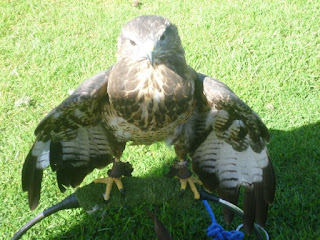 And the poultry tent offered up the Biggest Bunny In The World (which Sonshine dearly loves and we go to visit every year at the show). 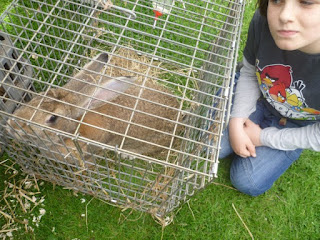 And a cockeral with a rubber glove on his head. 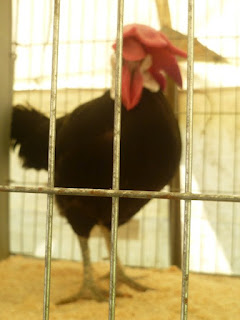 And the next time someone tells you that you're a horse's ass, don't be upset.  Here's some fabulous horses' arses. 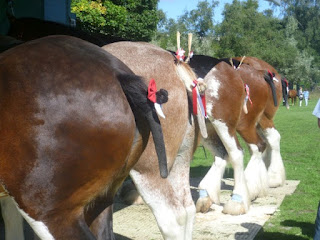 When Diane is not trying to beat my hair into submission at the the hairdressers, she is talcum-powdering Lady Di's feet.  Gorgeous isn't she? The horse.  Not Diane.  You can only see the back of her head in this shot.  Diane.  Not the horse.  No more gin for me today, I think. 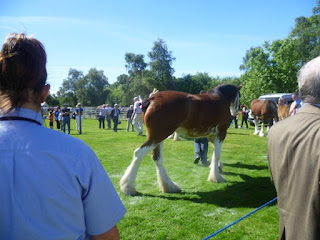 At half twelve, I returned to the tent of the Gin and Tonic and had another one. MSP Candidate type person was there and I was moaning about the price per litre that farmers get paid for their milk.  Not being a farmer, I'm not sure how convincing I was. Especially as I was brandishing owl feathers as I spoke.

The show was fabulous.  So much better weather than last year.  In fact, someone got carted off to hospital (mercifully just across the road) with heat stroke.

I visited the hospital before going to the show, with Sonshine, to get his teeth inspected by the Dentist.  The dental nurse looked ruefully out of the window and said: 'Do you know how many times I've heard 'Donald Where's Your Trousers today?  Six times.  SIX times and it's not even 11am.'

I suspect the hospital staff will need more than the one G&T by show close today at 4pm.

Delphic utterances by Alison Cross at 14:11