Hestia and the importance of grammar

Given that he is an Engineer - and a Scot - I am aware that English is not Tartarus's first language.  Or, indeed, his second.

But it came to pass that he e-mailed me to say that he was bringing home a painting of the ship.  His beloved, elderly ship, now sold to some unsuspecting Mexicans.

We have a Rogues Gallery of all the vessels that he has sailed on.  Verily, a flotilla of ship photographs in plastic frames bobs around the upstairs hall.  As close to the bathroom as I can get them.

He is very proud of his ships.  Another one to the fleet would be no hardship.

He duly arrived home and snapped open the locks on his case, handing me a small oil painting.

I'm no Brian Sewell, but I could tell that there was no trace of a bright orange-hulled ship with a helideck in it.

'No - I said that I was bringing home a painting OFF the ship...' he corrects me.

And that, dearest reader, confirms that wars do, indeed, start over such trivialities as a missplaced comma.

Or in Tartarus's case, that a murder can be committed as a direct result of a missing 'f'. 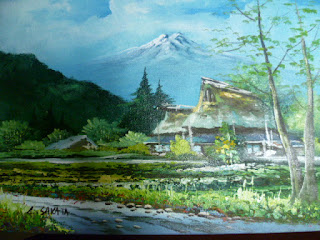 Picture OFF a ship


Have you too, endured the fall-out of sloppy grammar?

Delphic utterances by Alison Cross at 15:02