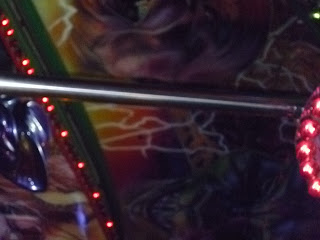 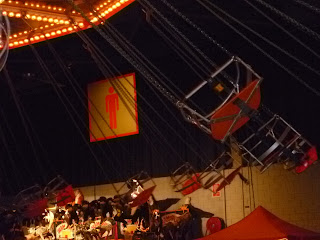 Here is Tertarus and Sonshine on the Revolver ride...... 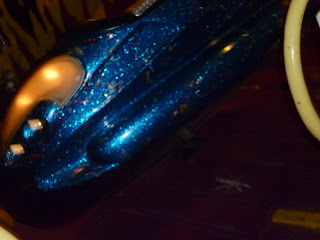 As you can see, we are absolutely SHIT at taking action photos with our new compact digital camera. And Tertarus is just shit at taking photos, as this stationery one of me and Sonshine waiting for the ride to start proves.

Here's a lovely cake that I photographed the night I Fell On The Ice (more of which later).  Yes, your eyes do not deceive you, it's a MASSIVE Tunnocks Teacake cake.  Had to photograph it at an angle cos the flash kept bouncing off the glass and just whiting everything out. 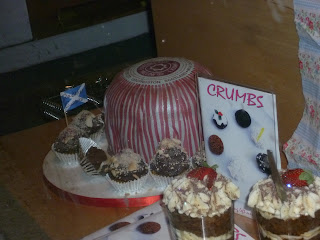 The break in Glasgow was great....right up until Tertarus put me on a ride at the Carnival that I hadn't seen running beforehand.

'It's sort of like a Waltzer only with more g-force,' he smiled, clunking the safety barrier into place in front of us.  Sonshine smiled up at me. 'Don't worry, mummy, I'm here.'

It may just have been co-incidence, but I could start to feel my Monthlies arriving.  Three days early.  On the middle of a RIDE at the carnival.

By the time the ride stopped, I couldn't even open my mouth to shout at Tertarus, I felt so bilious.  I got off the ride and my buckling legs carried me down the steps and onto terra firma.  There was no two ways about it, I was going to be sick....plus, as I hobbled off to the toilets (mercifully right next door) I knew that my period had arrived.

Reader, by the time I got into my cubicle I looked as if I'd been shot in the arse.

I was, thankfully, a Good Girl Guide and was prepared for early arrivals and managed to sort myself out.  But that was the end of the rides.

Tertarus and Sonshine gave me a family hug when I emerged and Tertarus offered an apology.  Which was terribly rare and very nice of him.

They opted to go on the dodgems and I sat weakly on a bench, leaning against a wheely bin and hoping that I wasn't going to feel shit any more.


Delphic utterances by Alison Cross at 12:00