Hestia and some random updates

2  I don't really have anything to blog about right now.

4   I have been up at the school campus making potato bread and gnocchi.  I thought I was just going to watch a demonstration, so I tipped up in my orange sweater.  And was handed an apron.  A warm room is needed to help the yeast do its thang.  I was so hot I thought I was having a flash.

The bread was, unfortunately, so gorgeous that I ate half a loaf and about half a pound of butter BEFORE I went for my weigh in with Slimming World.

6  Tartarus is in Bulgaria and I am missing him.  This IS news.  Usually I don't care where he is.  But I am missing our cups of tea as he reports from the coal face of the garage and some THING that needs fixing on someone's motorbike and I report on some THING on facebook that has held my attention for five hours.

7  I've started going running again.  This 'running' is a term that I use very loosely.  Truthfully, I am going 'walking slightly faster than I generally do.'  Nero hates it because it's a useless speed for him - neither walking nor running.  Lolloping.  Nero is lolloping.

No, that's not true.  This morning I was jogging behind him and he was walking.  I jog slower than my dog walks.  There's an admission.

8  I am getting excited about going to Italy in April.  Without family.  Meeting up with a group of Tarot fans and 'sploring museums and, hopefully, eating my own bodyweight in risotto milanese.  Minus the veal shanks.  Because, well, VEAL.

9  I bought all 80 of the Penguin 80th birthday Little Black Books.  I could not afford it, but it's BOOKS. 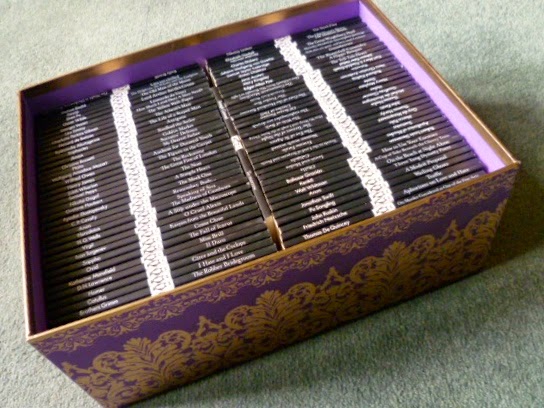 10 I am wakening up at 3am with the Nameless Dreads - death, disease, famine, never amounting to anything, alien invasion - yes, fear of it all hits me at 3am.

11 Sonshine has hairs growing on his legs and his voice is up and down like a bees wing.  He's growing up.  Hence the Nameless Dreads, I think.

Enough about me, how are YOU?
Delphic utterances by Alison Cross at 14:51