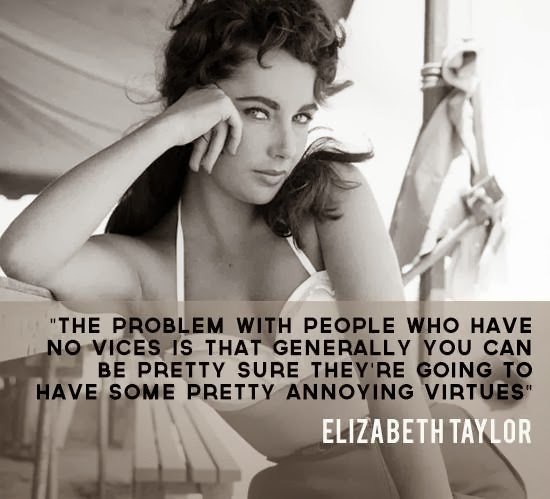 Elizabeth Taylor's love life is the stuff of legend - death, divorce, adultery - all seen through the lens of a newly born media merry-go-round.

And mine is exactly the same - apart from the death, adultery and celebrity.

There's a lot to get through - shall we just dive in?

As soon as she hit 18, Elizabeth started kicking at the traces that had held her so firmly in place as a child and adolescent - the Studio and her mother.

Four weeks after meeting Hilton heir Conrad 'Nicky' Hilton, she ran up the aisle at a star-studded wedding and immediately slapped straight into marital trouble.

Apparently Hilton was unimpressed with his young and inexperienced bride and headed off to the gambling tables and bar - on their honeymoon.  My mother, Juno, font of all knowledge, says that he had struck her too.  200 days after they were wed, the marriage was over.

About a year after her first divorce, the determined Ms Taylor set her hat at charming English gentleman actor, Michael Wilding.  He was 20 years older than Taylor and although he relocated to Hollywood, his career there never really took off - while Elizabeth's career was blooming.  She became frustrated with him and the marriage petered out after 5 years.  Which isn't bad going really at all.

After the gentlemanly Wilding, Elizabeth's head was turned by actor Mike Todd.  From what I've seen they seemed beautifully matched.  He was an older firebrand of a man and she loved the excitement, the passion and, heck, they seemed to have a wonderful time in each other's company.

They seemed deliriously happy.  And then Todd was killed in a plane crash. This was her only marriage not to end in divorce.  Taylor later called him one of the three loves of her life (the other two being Burton and jewellery).

She was absolutely crushed after his death - her friends were on suicide watch - but she still forced herself to return to work on Cat on a Hot Tin Roof weeks after his death.

Crazed with grief, Elizabeth sought out pop idol Eddie Fisher to lean upon.  Fisher had been Todd's best friend and he and his wife Debbie Reynolds had witnessed Taylor and Todd's wedding.  Taylor said that she was desperate to keep something of Todd's alive and she soon fell in love with Fisher.

It was a terrible scandal.  Reynolds and Taylor had been friends and the whole relationship implosion took place in the glare of publicity.  The public turned on Taylor, turning her from the grieving widow to the callous home-wrecker.

Within a year of Todd's death, she was married to Fisher and almost immediately regretting her actions.

By all accounts she treated Fisher very badly and his humiliation was complete when Elizabeth took the role of Cleopatra and reconnected with Richard Burton......

So, there she was, signed up for this stunning turkey of a movie and Richard Burton comes on set with a hangover.  They had met before, but Taylor had not succumbed to the Welshman's charms.  But this time it was different.... and within five days of them meeting again on set, they were at it like knives.

There is a story that Burton turned up at a dinner party thrown by the Fishers and demanded that Taylor come over and stick her tongue down his throat. Which she did.  In front of her husband and her dinner guests.  Bad Elizabeth!!!  The following day she tried to kill herself - racked with the killer combination of remorse and overwhelming desire.  Well, it's how the story goes.

They became THE celebrity couple - RichEliz - if you will :-D

The media storm was colossal - they were both married to other people.  Still filming Cleopatra, there was a moment when 7,000 Italians were to surround the 'chariot' of Cleopatra, calling her name.  The studio were terrified - the Pope had just denounced her by name - and they were expecting a LOT of trouble when she appeared on set.  But something had changed in the world.  As Cleopatra was pulled through the crowds, they went mad - calling Taylor's name and cheering.

She had out-trumped the Pope!

Of course, she divorced Fisher and married Burton.  They believed in living for the now and spent their money like it was going out of fashion - jewels, yachts....but the tempestuous passionate relationship began to fizzle out.

The pair starred in Who's Afraid of Virginia Woolf?  Possibly her finest performance, imo.  Maybe a little of that decaying personal relationship seeped into the cracks of Martha and George.

..... and then they remarried a year later!  But it was not to last - the relationship was over a year later.  But they remained in contact and Elizabeth said in a documentary that Burton had ranted to his brother:  That bloody woman! I'll probably end up marrying her again because I still love her.'  Which must have made Burton's widow feel FABULOUS.

Husband no 6:
Senator John Warner
Taylor married Senator Warner in 1976 and marks the period where she became an activist in many causes.  It also marked the period of her weight fluctuations.  Taylor was determined to stay at home on the ranch and be a good Senator's wife.  But she was lonely and bored.  But the marriage held together until the early 1980s.

Taylor had not enjoyed good health throughout her life and by the time she split from Warner, she was dependent on prescription drugs and the booze.  Determined to clean up, she headed off to The Betty Ford Clinic..... and came out with fellow recoverer and construction worker Larry Fortensky.  He was 20 years her junior.  Good on you, Liz!  And do you know, their marriage lasted for 8 years - not always a happy union, but again, a respectable time for a marriage, in Hollywood.  They split - he returned to construction work with a £1.3m payoff and a great set of stories for the bar, no doubt.

And that is it.

The eight marriages and seven husbands of Elizabeth Taylor.

Liz and I do have something genuinely in common - we both married Richard Burton.  No. Not really. But Tartarus and I got married and then got divorced. And then I realised that men who can fit patios, make lasagna and put up with my slatternly housework ethos are pretty thin on the ground.  And we got back together.  And we are still together.  Sort of.

Tartarus is like Burton in that he likes a bit of a drink.  But he's not an alcoholic, nor has he driven me to prescription pain-killers or the whisky bottle.  Actually, I HAVE developed a little taste for whisky and ginger ale.....

What have I learned from today's mammoth study session?  That when she fell in love she fell hard and fast and was inevitably disappointed when the 'fire' died down.  That she tended to marry just about everyone she slept with.  So she was an old-fashioned gal really.

Even Debbie Reynolds forgave her.

Delphic utterances by Alison Cross at 12:01