When we were in London last month, we focussed our touristy attentions on The Tower of Lahndahn. As we made our way, wind-whipped and wet to the ticket booths, I spotted a fancy arch across the road.  Now, Lahndahn is FULL of fancy arches.  This was a war memorial arch.  For the Merchant Navy.

I tugged at Tartarus's sleeve and pointed to the arch.  He's served in the merchant navy since he left school and I knew that he'd be interested.  And he was.  But it was too wet and horrible to go and explore, so we turned our chins back into the wind and squinted out beneath our woolly hats and pressed on to the Tower....

A couple of days later and the weather has perked up.  So we went back.  Tartarus and Sonshine disappeared into the garden, but I wandered beneath the arch, scouring the plaques looking for ships that had been registered in Glasgow...reading the lists of all those who had perished at sea.

Sometimes it was just one or two names and I hoped that the rest of the crew had been picked up and taken to safety.  I imagined them struggling in the ocean, how terrifying it must be - maybe in the dark, maybe trying to keep afloat in waves of monstrous height,  Maybe surrounded by the vessels of the very people who just blew your boat to kingdom come.  Would they pick you up or would they leave you to die in the sea?

Sonshine materialised by my side and in his usual 'oh-god-you're-embarassing-me' voice asked 'Are you crying?'

I nodded, tears dripping off my chin. 'Where's your dad?'

'He's outside looking at the other names'

'Yes.  Mum, this is just the sailors and fishermen people lost in the FIRST world war.'  I went out side and saw this: 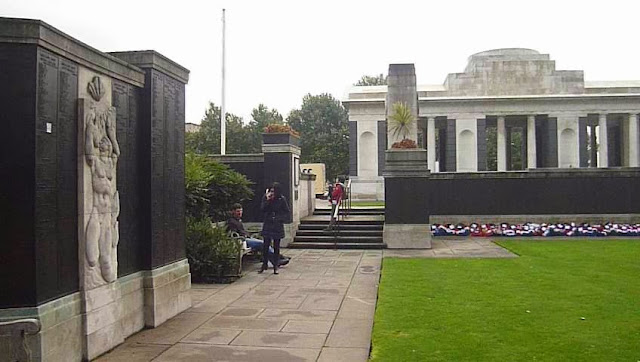 Wall after wall after wall after wall of names.  Every bit of dark surface in this photo is crammed with names, and this is one corner of the garden with the main arch looking out onto the streets of London.  The walls run out and in, almost like castle crenellations, to take the endless plaques of names in the tiny garden space.

There are acres of names in the garden. So many that it's utterly overwhelming.  All those sons and brothers and husbands..... I shot a tiny clip of video - sorry that my voice is in my boots, but I was somewhat overcome.

Some names had little photographs blu-tacked next to them - the faded pictures show fresh-faced, cheeky-looking young men.  I wondered whether a nearby secondary school had done a project on some of the sailors who were on the memorials.  This is A B Robertson. 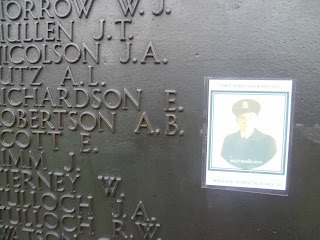 Tartarus was standing at one of the plaques, hands in pockets, silent and inscrutable as ever.

It was someone who shared his surname and his initial.  Maybe some distant relative.  Someone with his name doing the same job as he was doing just now.  Someone who had sailed on the British Security,  registered in London and who never came home.  I slipped my hand into his pocket and gave his clenched up hand a squeeze. 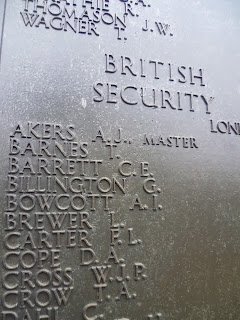 The merchant navy ships had little in the way of weapons, just supplies for home.

At the going down of the sun, we must remember them too.

Delphic utterances by Alison Cross at 11:32