'You ARE going today, aren't you?'

'Well, I did sit through two hours worth the day I came home.  I think that's sufficient attention to the Arts for one session.  Besides I need to cut the grass.'

'What kind of message are you sending him by not coming,' I said accusingly.

'The message that I'm too well to attend. He'll be too excited to notice that I'm not there. And besides, that the grass needs cut.'

I loathe going to these shows on my own.  Not a native of the island, I often sit in silence while friends get together and converse around me.  I smile encouragingly.  But I must smile like a child-killer because few people then opt to include me in their chat.

In preparation for this eventuality, I pack a huge seed catalogue into my capacious handbag.

I opt to wear my brand new Uggs.  My concession to fashion.

Two elderly ladies seat themselves to my left and a gaggle of young mums make up the crowd on my left.  No one talks to me.

I consider getting the seed catalogue out and opt instead to Be Brave and strike up conversation with the elderly dears.  They are there to see a grand-child and a grand niece.

Sonshine and his friend do the introductions.  They are actually quite funny.

Act One comes on - a class singing along to Van Halen's Jump.  It doesn't give Simon Cowell much to worry about, but it is sweet.

Another class comes on to do the Twist.

'Who is the little girl in the blue dress in the middle?' asks one of the ladies.  I apologise and say that I don't know.

The next act comes on 'Who is the little blonde boy over at the far side?'  I apologise again and say that I don't know.

Sonshine and his friend fluff up their next introduction to much general hilarity.

'Who is the little girl in the orange plaid shirt doing the comparing?'

There are no further questions.

At the end of the concert we look outside to the sky which has gone preternaturally black. Rain is thundering down so hard that you cannot see to the other side of the car park.  Word ripples round the hall like a wave: 'The school's flooding....we all need to leave.'

And so it came to pass that I stood in the main doorway, looking out at a stretch of car park about 50 ft long, over 6" deep in water.

'Is there no other door on the other side of the building?' I wail looking at my spanky new boots. I am a GIRL when it comes to getting my footwear ruined.

'It's only going to get worse,' says a teacher grimly. 'Off you go.'

Although I tried to make myself as light as possible by holding my breath and waving my arms around in manner of tip-toe stage amateur dramatics....my brand new, gorgeous boots, they were soaked through.

Sonshine and I sit in the car, gently steaming the windows in our wet clothes.

So much for not noticing. 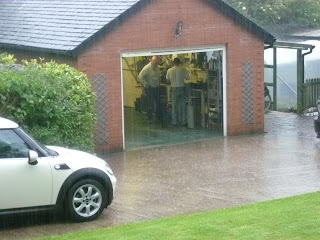 The grass, half cut.  And the rain. And Tartarus and The Boss in the garage.


Delphic utterances by Alison Cross at 15:54