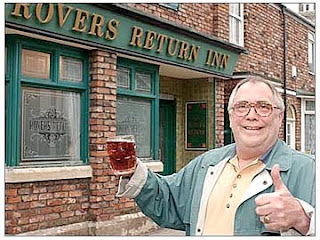 I just wanted to pop in to let you know that I heard from Prometheus the other day and he's gone all outdoorsy AND left his wife for Another Woman (well, he did it more than 10 years ago - but it's news to ME!) and I hope we continue to keep in touch.  But that's it.

Bank Holiday weekend here and some girlfriends came over to give me a visit - which was lovely, because normally I have to schlep up country to visit everyone.  It was the Vet and The Mad Woman from Kilmarnock.  The Vet had brought with her some snaps circa 1993.

We laughed at our Coronation Street party - I was Jack Duckworth and wandered around with a tray full of drinks, sellotape around the leg of my glasses and a banana down my trousers.  You should have seen the rest of them: It was not a party at which you would have been looking for a lumber, as we say up here.

I could hardly take my eyes of myself in the photos - I was so slim.  And even though that was probably the effects of the Dumped Diet (you know the one - you get dumped, you shuffle salad around on your plate for many weeks and believe that you'll never love anyone like that again), I really looked quite nice.

Especially in the Hogmanay photos.  I was surprised to see myself in them.  I looked lovely in my tartan mini skirt, thick black tights (God bless Donna Karan for THAT idea) and my Bonnie Prince Charlie kilt jacket, resplendent with silver buttons.  Somewhere in this house, that jacket and skirt still resides.  The jacket is so tiny it almost fits Sonshine.  And so does the mini skirt.

Why did I always think I was so fat and unattractive?  A question that women the world over ask themselves as they look back at old photos of themselves, I suspect.

Over the course of the afternoon, we drank two bottles of wine, a million little bits of sushi, some lemon cheese cake, some pizza, some olives, some open sandwiches and stuffed pepper things.

I waved the girls off at 5pm and by 6pm I was ready for my bed!

Oh yes, I ran two miles.  Not the same day that the girls came over. On Monday.

Sonshine and I started watching Planet Earth with Richard Hammond (mother hates him: ' Why is that little man on EVERYTHING?' and had to give up near the end with a film about poaching elephants (much worse than poaching eggs). The tears and snotters started with the first appearance of the starving little lion cup....got progressively louder and hotter at the shivering little black bears up a tree in North America somewhere...and when the elephant calf disappeared the overall face-wetness became overwhelming.  And Sonshine found it distressing too.

Yes, nature is red in tooth and claw - but come ON people, give us something bloody cheerful to watch!

What have you been up to?  Do tell.


Delphic utterances by Alison Cross at 12:52